[530 AM Winter Storm Update Part 2] Snow changes over to rain later Sunday near and south of the I-95 corridor before going back to snow late Monday. For more detailed thoughts see the forecast discussion at https://t.co/aqcnsXbggc, and graphics at https://t.co/iTrYwAeB1d

No big changes in snow forecast from yesterday. One thing to watch for is on early Tuesday morning. At that time, we go back to snow across eastern Mass & will watch to see if heavier snow band on back side of storm is over eastern Mass or just offshore. pic.twitter.com/aNaCz9Ohtx

David Epstein: ‘Could be two mornings of delays/cancellations ahead.’

Latest snow may through Monday midday. There could be some additional snow east of Worcester Monday night-Tuesday. Less confidence in this second round in terms of how much. Little to several more inches possible. That would be for Boston as well. More on that tomorrow. pic.twitter.com/Va905XazDx

Snow arrives 2-5 pm Sunday, then mix-rain before lightening up. Then another round of snow for Monday night Tuesday. Could be two mornings of delays/cancellations ahead. pic.twitter.com/F1SiIjDyrd

Eric Fisher, WBZ: ‘We basically have a 3 part storm.’

So just to reiterate, we basically have a 3 part storm.

Part 3 is def a wildcard. Could be a lighter/moderate snow…could get a solid flare up of snow. Probably will stay rather uncertain until tomorrow https://t.co/Rrh0C1WwPJ

For coastal and southern areas, you’re going to lose snow Sunday night through Monday with milder air and rain. Can get idea of this from modeled snow depth retreating. pic.twitter.com/0EqsTpQM4N

Snow moves into Worcester County after lunch tomorrow, and closer to sunset for Boston.

Tricky forecast: Snow changes to a wintry mix along the Pike and along I-95 overnight, and to rain for SE Mass and areas along the coast. @7News pic.twitter.com/iLUYb6wDdr

Snow moves in around sunset tomorrow, and then transitions into a wintry mix along the Pike and along I-95 overnight (mainly rain along the coast). The highest snow totals will be outside of I-495.

Stay tuned– we will continue to fine-tune the forecast. @7News pic.twitter.com/swsOOX2eeo

When you will see the first flakes in your town: pic.twitter.com/VF2bbry62q

Michael Page, NBC10 Boston and NECN: ‘If you’re coming back through the Berkshires on the Mass Pike, try to do so by noon to beat the snow.’

Good Morning! Not much change to the forecast from yesterday, but here’s what’s new this morning to better answer your questions.
The headlines:
?Travel before noon Sunday
❄️1-2 ft. of snow for mountains of W. MA, S. VT
?️Changing to rain at coast

? SCHOOL CANCELLATIONS
Best chance for cancellations would be along and outside of 495, through parts of Central Massachusetts & Southern New Hampshire

Kelly Ann Cicalese, WCVB: ‘Heavy thump of snow will bring a good portion of our total snowfall by Sunday evening.’

This tweet is for the kids! The snow will pile up quickly Sunday PM, but a changeover to rain for many areas Monday AM means the amount of snow you wake up to will be significantly less than what has actually fallen. Best #snowday potential on Monday is N & W of I-495. #wcvb pic.twitter.com/SIHlfYxmgf

In addition to snow and rain, our next storm will bring strong wind Sunday evening through Monday. Gusts over 40mph will be possible on the outer Cape & Nantucket. #wcvb pic.twitter.com/cAGQn8D0W6

If you or someone you know is traveling from the south, keep in mind that the storm will start to impact areas such as NY, NJ and PA by Sunday morning. It will arrive for us by the mid-afternoon. #wcvb pic.twitter.com/gCABmS6viz

Heavy thump of snow will bring a good portion of our total snowfall by Sunday evening. Snow continues to pile up through Tuesday AM N & W of I-495. Areas S & E will see a changeover to sleet & rain by Monday AM, before turning back to snow Monday PM. #wcvb pic.twitter.com/5D2MvtWN2x

Mike Wankum, WCVB: ‘There will be an incredible range in snowfall totals, even in the city of Boston.’ 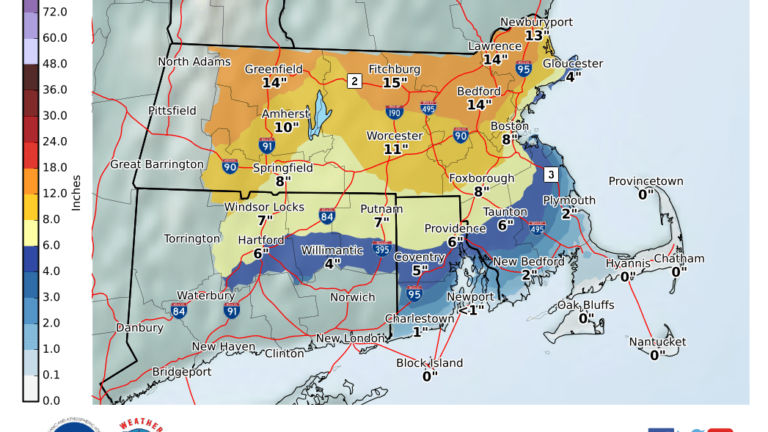