After missing the playoffs for the first time in 12 years in 2020, the Patriots went all out in the offseason, spending a record $163 million in guaranteed money.

A year later, the Patriots saw their win total increase by three games (it should be noted an extra game was added to the schedule), which was good enough for them to make their way back to the playoffs. However, they were nowhere near good enough to beat the Bills once they got there, losing in humiliating fashion.

Now that several of the marquee signing free agents have played a whole season in New England, let’s assess how impactful each one was in helping the Patriots reach the playoffs.

Hunter Henry: In 2020, the Patriots had the worst receiving production from tight ends in the league. They made sure to address that in free agency, signing Henry to a three-year, $37.4 million deal ($24 million guaranteed). The contract made Henry the fifth-highest paid tight end in the league at a per-year basis at the time.

Henry had a bit of an up-and-down season, recording two or fewer catches in nine games (including Saturday’s loss to the Bills in which he had one catch for 30 yards). He was also closer to the middle-of-the-pack in terms of receptions (50) and receiving yards (603), ranking 17th and 13th, respectively, among tight ends in those two stats.

But Henry’s value came in the red zone. His nine receiving touchdowns were tied for the most among tight ends this season, giving rookie Mac Jones an easy target in the red area and giving the Patriots an end zone receiving threat that they haven’t had since Rob Gronkowski left.

Kendrick Bourne: The veteran receiver was certainly the Patriots’ best signing in terms of value this past offseason. Bourne signed a three-year, $15 million deal and was largely viewed as an afterthought among the other receivers and tight ends on the Patriots’ roster entering the season.

Bourne not only stepped up to assert himself as the team’s No. 2 receiving option, but he also got better as the season went along. He finished second on the team in receptions (55), receiving yards (800), and receiving touchdowns (five). He was also arguably the team’s lone bright spot in the playoff loss to the Bills, recording seven catches for 77 yards and two touchdowns.

Bourne also had a knack for making some big plays, including catching a 75-yard touchdown late in regulation to give the Patriots the lead against the Cowboys in Week 6. But he was also used in other facets, stepping up as a rusher in Week 10 against the Browns when the Patriots didn’t have Damien Harris, running for 43 yards on three carries.

After a good Year 1 in New England, the 26-year-old should be a player to watch over the next couple of seasons as he spends more time with Jones.

Matthew Judon: You can’t deny that the way Judon ended the season was disappointing. The Pro Bowl pass-rusher, who signed a four-year-$56 million deal in the offseason, failed to record a sack in the last four games of the regular season and in Saturday’s playoff loss to the Bills, in which he didn’t start. He also recorded just one QB hit and one tackle for loss in that stretch.

At the same time, it’s also hard to deny how good he was in the Patriots’ first 13 games of the season — in which he was the team’s most consistent performer. Judon recorded 12.5 sacks, a career-best, during that stretch. He recorded at least a half-sack in six of the seven games during the Patriots’ seven-game win streak and in an earlier stretch, he recorded 6.5 sacks over four games.

Even though he makes roughly $13.6 million per year, Judon’s yearly salary ranks 21st among edge rushers, per OverTheCap. While Judon’s stretch to end the season could be a bad sign for the future, his 12.5 sacks — tied for the seventh-most in the league — made the signing worth it for 2021, at least.

Jalen Mills: The Patriots signed the former Eagles safety to a four-year, $24 million in free agency, but he ended up playing a role that many probably didn’t think he’d play.

As Stephon Gilmore’s holdout/injury rehab turned into him eventually getting traded, Mills was inserted as the team’s other starting outside corner alongside J.C. Jackson.

The experiment didn’t start off too well for Mills and the Patriots — reaching a breaking point in the Week 6 loss to the Cowboys in which he gave up six catches for 98 yards. Following the loss, the Patriots started to play more zone coverage.

The switch to zone helped Mills a lot as he allowed two catches or less in coverage in eight of the Patriots’ final 11 games of the regular season. He missed the wild-card game against the Bills due to being on the reserve/COVID-19 list and while he wouldn’t have made a difference, you would like to think Josh Allen wouldn’t have had more touchdowns than incompletions if he played.

With three years left on his contract, Mills is likely in New England for the foreseeable future — especially with Jackon set to be a free agent. He could also replace Devin McCourty if the veteran safety hangs the cleats up this offseason.

Kyle Van Noy: When the veteran linebacker announced his return to New England, he called back the “Boogeyman” defense he was a part of in 2019.

After a rough start to the season, Van Noy had a stretch in which he looked like his 2019 self — recording four sacks, a pick-six, and 49 combined tackles over the final two months of the regular season.

Despite the uptick in stats though, he was part of the starting linebacking corps that was killed in the run game late in the season — just like the 2019 squad. The Patriots’ run defense allowed 791 yards over the last five games, including the playoffs, giving up 5.2 yards per carry. Obviously, Van Noy isn’t solely to blame for that, but when the team is that bad at stopping the run, it falls on everyone.

Van Noy was signed to a two-year, $12 million deal in the offseason.

Davon Godchaux: The Patriots signed Godchaux to help solidify their defensive line during the offseason, giving him a two-year, $15 million deal.

Godchaux was solid in the run game for much of the season, recording the fifth-most tackles on the team with 65. He also led the team in missed tackle percentage, missing just three percent of his tackles.

But he wasn’t much of a factor on pass defense. He had just one sack and five pressures this season.

Backup tight ends Foster Moreau, Albert Okwuegbunam, Geoff Swaim, and Durham Smythe all had more receptions and/or more receiving yards than Smith (who had 28 catches for 294 yards) this season. Their combined salaries this season? $6.9 million, which is nearly half of what Smith makes on a per-year basis on his four-year, $50 million deal.

Like Henry, that contract made Smith one of the five highest-paid tight ends in the league at the time. But it’s clear that Smith looks far from a top-five tight end. The Patriots tried to get creative with Smith at times, giving him nine carries throughout the season. That wasn’t enough for him though to show much upside in the Patriots’ offense.

Nelson Agholor: While the Patriots made a good signing at receiver and tight end this past offseason, they also made a bad one at each position.

The Patriots signed Agholor to a two-year, $22 million deal after the veteran recorded a career year in Las Vegas. Agholor’s signing was arguably the most criticized at the time due to how he played with the Eagles in the five seasons of his career prior to the Raiders. But Agholor got off on the right step to start his Patriots career, recording five catches for 72 yards with a touchdown in Week 1.

To put a cap on his first season in New England, Agholor had just one catch for 18 yards in the playoff loss to the Bills. His other target in that game was on Jones’s deep shot that was intercepted in the end zone by Micah Hyde, where Agholor could’ve arguably made a better play to try and catch the ball.

Losing Stephon Gilmore: Now, Gilmore didn’t leave New England until October. but it’s hard not to think that if the Patriots didn’t spend the amount of money they did, maybe they would’ve had some extra space to give Gilmore the restructured deal he wanted.

Instead, they traded him to the Panthers to shed his salary to help make room to sign Jamie Collins.

Having Gilmore wouldn’t have stopped the Bills from running all over the Patriots in Saturday night’s playoff loss. But maybe having him could’ve been the difference in the game against the Cowboys — in which they allowed 445 passing yards in an overtime loss — and in the second game against the Bills — in which Allen threw for 314 yards. If the Patriots won either of those games, they wouldn’t have faced the Bills in Round 1 and if they won both, they would’ve won the division.

Now, the Patriots’ season is over after an embarrassing wild-card round exit. With Gilmore gone and Jackson set to become a free agent, the Patriots have huge questions at corner, even after spending the amount of money they did last offseason. 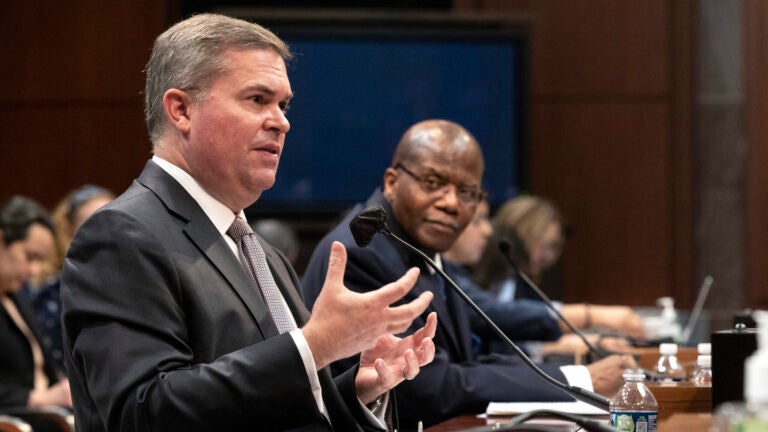 At House hearing, videos of unexplained aerial sightings and a push for answers