A glance at the Patriots’ schedule can be a scary sight.

Just ask former cornerback Aqib Talib, who ended up choosing retirement over a year in New England. After coach Bill Belichick called to gauge his interest in returning to the Patriots to defend tight ends, Talib took a look at the opponents and started shaking his head.

Travis Kelce, George Kittle, and Darren Waller? No thanks, he said.

But tight end isn’t the only position where New England’s defense will be tested.

What do Lamar Jackson, Josh Allen, Kyler Murray, Deshaun Watson, and Russell Wilson have in common? They all ranked in the top six for rushing yards among NFL quarterbacks last season — and they’re all the Patriots’ schedule, too.

Containing a mobile quarterback has, at times, proven to be a challenge for the Patriots. In 2018, the team allowed an average of 6.9 yards per carry to quarterbacks — the highest mark in the league. Last season, that stat improved to an average of 4.7 yards, but the team still got burned by Jackson in Week 9, when the 23-year-old MVP ran for 61 yards and two touchdowns, in addition to completing 74 percent of his passes.

Sunday night’s game against Wilson and the Seahawks will be the Patriots’ first of several opportunities this year to show what they can do against dual-threat quarterbacks. In Week 4, they’ll travel to Arrowhead Stadium for Patrick Mahomes and the Chiefs. In Weeks 8 and 16, they’ll get the Bills’ Allen. And in Weeks 10, 11, and 12, they’ll go back-to-back-to-back with Jackson, the Texans’ Watson, and the Cardinals’ Murray.

In preparing for such opponents, perhaps the addition of Cam Newton plays a factor. Newton has rushed for at least 450 yards in seven of his previous nine NFL seasons, a stark contrast to former Patriots quarterback Tom Brady, who rushed for a career-high 110 yards in 2002.

With no joint practices or preseason games this year, pitting the team’s starting offense against the starting defense during training camp forced the defense to account for Newton, a mobile quarterback, rather than Brady, a traditional pocket passer. Newton, who holds the record for rushing touchdowns by a quarterback in a season with 14, presents more options than Brady because of his ability to extend plays and/or keep the ball himself.

According to inside linebackers coach Jerod Mayo, those reps “definitely helped.”

“For 20 years here with Tom, we didn’t really get a lot of the read-option, read-zone stuff,” said Mayo. “It was definitely good to see during camp and see every single day.”

Once the season begins, teams typically do not deploy the starting quarterback against the defense.Instead, the scout team will often have a player mimic the tendencies of the opposing quarterback. Ahead of the Seahawks game, for example, undrafted rookie cornerback Myles Bryant assumed the role of Wilson during scramble drills.

“You have a guy like Myles, who’s very slippery, very athletic,” said linebacker Brandon Copeland. “He’s trying to imitate Russell Wilson right there with them. I won’t sit here and say that Myles can throw like Russ. I won’t disrespect Russ like that, and I won’t give Myles that type of credit because I’m sure he’ll try to switch his position. But he definitely gave us a great look, and you do what you have to do to get your guys prepared.”

“We ask those guys to give a perfect look exactly like the opponent we’re about to be facing,” added defensive line coach DeMarcus Covington. “It’s always great when you can have players simulate what you’re going to see on Sundays.”

Even if the defense is not regularly facing Newton during practice, Mayo noted how Newton would be willing to assist if necessary.

“When you look at the history of the New England Patriots, we’ve always had starters go show the opposite side a look,” Mayo said. “I remember coming in as a rookie, Mike Vrabel and Tedy Bruschi, and Rodney Harrison, all those guys were on the show team. That’s one way that we get each other better. I’m sure that if the coaches ask Cam to give us a look, he would definitely be up to it.”

Mayo and other assistant coaches were quick to note that every quarterback is different, so comparing Newton to Wilson or Newton to Jackson isn’t a one-for-one exercise. Either way, starting Sunday, the group will get its first taste of what’s to come. 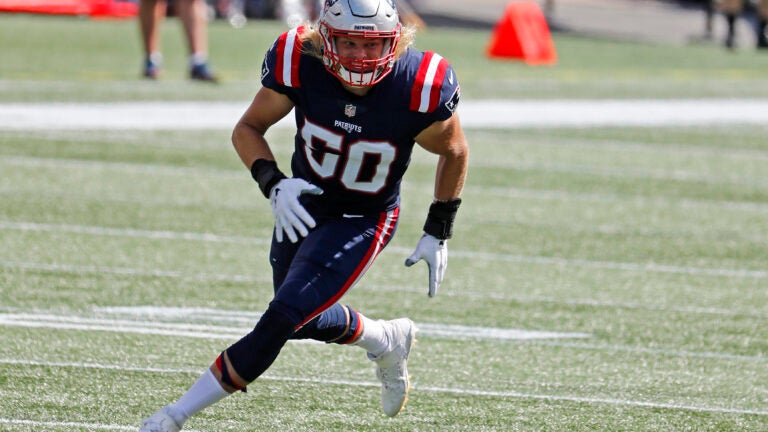