If you weren’t thrilled to see Marcus Smart return to the floor for the Celtics Thursday night, I have no choice but to assume that you wore all white to FTX Arena, only to leave for the evening early in the fourth quarter, if not sooner. Or, you’re Jimmy Butler.

Actually, we shouldn’t judge the Heat fans who departed the premises early, of which there appeared to be many. The hosts took an 18-8 lead early, and there was a flicker of tension in the third quarter, but otherwise the Celtics thoroughly dismantled the Heat in Game 2, taking a 25-point lead into halftime, holding serve with a 25-point lead at the end of three, and cruising to a 25-point victory (127-102) to even the series at a game apiece.

The victory, and the way it was achieved, was confirmation that the Celtics should win this series without a whole lot of suspense, provided that their starting five of Smart, Al Horford, Robert Williams, Jayson Tatum, and Jaylen Brown remains upright and intact.

Williams is back to being his springy self after missing four games in the Bucks series with a bone bruise in his knee. Horford returned as a stabilizing force as usual in Game 2 after missing the opener while caught up in the purgatory of the NBA’s health and safety protocols.

And Smart? Well, all he did Thursday night was change everything for the better, to the point — and not to get too far ahead here, but man, it is irresistible — that the Celtics are starting to feel like near-future NBA champions.

Smart missed Game 1 with a foot injury, and the Celtics missed him in so many ways during a 118-107 loss brought on by a disastrous third quarter in which the Heat outscored the visitors, 39-14.

In Game 2, he played like a man who had deeply missed being on the court for that one game, and had vowed to set everything right upon his return.

“I just kept telling myself, ‘Game 2, you’re playing, I don’t care how hurt you are, you’ve got to give it a shot,’ ” Smart said after a tour de force in which he scored 24 points, dished out 12 assists, grabbed 9 rebounds, and pounced for 3 steals, all while playing a team-high 40 minutes, committing just a single turnover, and locking down Heat star Jimmy Butler, streak scorer Tyler Herro, and any other unfortunate soul he was switched onto on the defensive end.

“As always, he sets the tone,’’ said Celtics coach Ime Udoka. “Defensive Player of the Year for a reason. Ability to switch and switch on to bigger bodies and just another good defender to throw at Butler and [Bam] Adebayo and some of those guys and not having to worry about them trying to pick on certain matchups. He brings the physicality every night and gets everyone else in line.”

Smart’s performance featured his usual idiosyncratic touches, too, those Marcus Moments that have made him a polarizing player at times, but often make him so distinctly fun to watch.

He confidently hoisted a team-high 22 shots (Tatum made eight field goals, as many as Smart, on nine fewer attempts), swished a baseline shot (plus drew a foul) from behind the backboard that was reminiscent of Larry Bird in execution if not style, argued with the refs that a Heat player had “grabbed [the ball] with his feet” (something he’s surely attempted himself before), and missed a layup on the break when he wrapped the ball around his waist for no particular reason. He was 2 for 11 from the field in the first half, but was essential to dominating in so many other areas that his plus/minus was plus-26. Those Marcus Moments, man.

It also must be noted that it was Smart who stemmed the tide when the resilient Heat were threatening to get back into the game late in the third quarter.

Miami had cut the Celtics lead to 17, jostling the remaining crowd awake, when Smart put an end to the notion of a comeback. He stripped the ball from Adebayo on one end, then sent Miami’s Max Strus toppling to the floor with a crossover move before burying a jumper. That put the Celtics up, 86-67, and after he drilled a three on a cross-court pass from Tatum a minute later, the Heat’s hopes had officially been extinguished.

The most amusing dichotomy regarding Smart is that a player who plays with an electric current of emotion running through his limbs has become a model of stability, proper execution, and poise. The Celtics missed his energy in Game 1, but there was much more they missed, too: his knowledge of where to be and how best to get there, his defensive intensity and versatility, his savvy playmaking that eases the burden on Tatum in particular, and his calming influence as the Celtics’ floor general.

“I’m blessed to be in this situation and to have the opportunity to go out and show what I can do,’’ said Smart.

Thursday night, coming off an injury, Marcus Smart did it all. His foot seems to be fine. His heart was never in question. 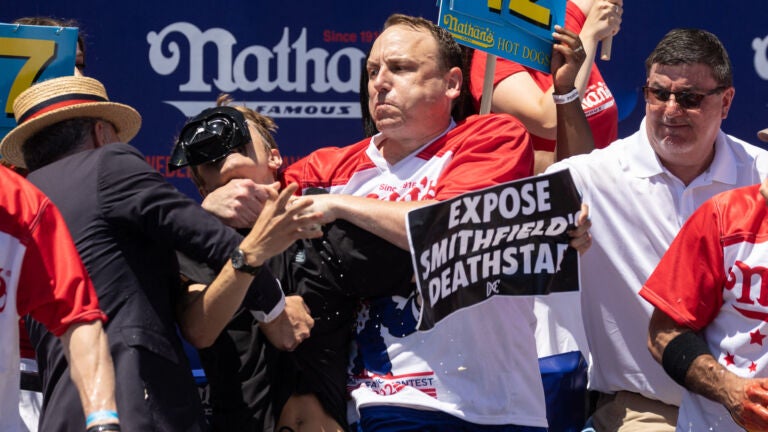