March Madness is finally upon us. Of course, Boston being a pro sports town, that typically doesn’t resonate around here. All hopes for a local entry into the NCAA men’s basketball tournament were dashed when both Northeastern and Harvard lost in the championship game of their conference tournaments.

However, Celtics fans might want to monitor some of the top players in the tournament with an eye toward the 2018 NBA Draft. Last June the Celtics traded the rights to the No. 1 overall pick to the 76ers in exchange for the No. 3 pick as well as a future first-round choice. If the Lakers’ pick — which Philadelphia had previously acquired — ends up in the 2-5 range in this year’s draft, Boston will receive it.

The Lakers are currently out of that range, having improved to 30-36 with Sunday night’s win over Cleveland, but could slip back in before the end of the season, or with a bounce of the Ping-Pong balls at the draft lottery. And while last year’s draft was dominated by guards and small forwards, it’s the big guys that seem to be at the top of everybody’s board this year.

So, with fingers crossed, we offer a look at the players to watch over the next three weekends.

Ayton’s name came up amid ESPN’s report through anonymous sources that Arizona coach Sean Miller was heard on an FBI wiretap discussing a $100,000 payment to the Wildcats freshman. At 7-1 and 250 pounds, Ayton is a man among boys, averaging 20.3 points and 11.5 rebounds. He won Pac-12 player of the year and rookie of the year, then was named the MVP for the conference tournament.

The Celtics likely will not get a crack at Ayton because he is projected as the No. 1 pick in the draft.

Could the Celtics land another one-and-done from the Blue Devils? Last year they grabbed Jayson Tatum with the third pick in the draft. Bagley is projected by some to go at No. 2. The 6-11 big man averaged 21.1 points and 11.5 rebounds en route to being named the ACC’s player of the year and rookie of the year. The Blue Devils finished second in the ACC and lost in the semifinals of the conference tournament to North Carolina. 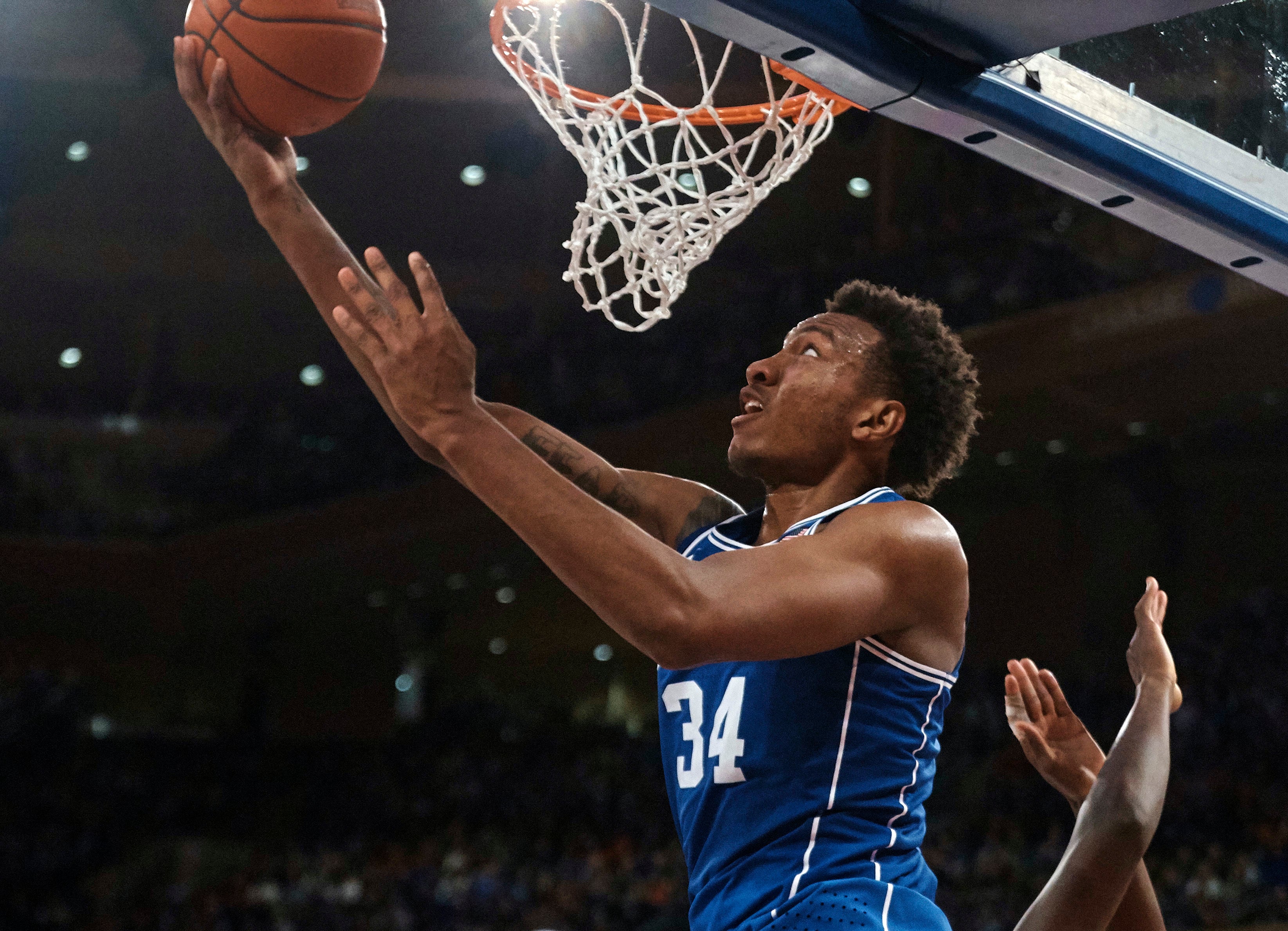 Many had hoped that Carter would take his talents to Harvard when the 6-10 forward was trying to decide which college he would attend. Carter was said to be seriously considering joining the Crimson, but he chose Duke.

Although overshadowed by Bagley, Carter still averaged 13.8 points and 9.3 rebounds, and while not projected to be selected with one of the first five picks, he is considered to be a Top 10 pick in this year’s draft. He runs the floor better than Bagley and is a better passer.

The 7-footer averaged 13 points and 10.5 rebounds for the Longhorns this season. He is long, using his 7-9 wingspan to block 3.8 shots while averaging almost 31 minutes a game. He missed three games late in the season with a toe injury, but returned for the quarterfinals of the Big 12 conference tournament. He scored 10 points on 4-of-5 shooting in 14 minutes to go with four rebounds and one blocked shot in a 73-69 loss to Texas Tech.

Bamba is projected to be selected within the first five picks, in some cases as high as No. 3. 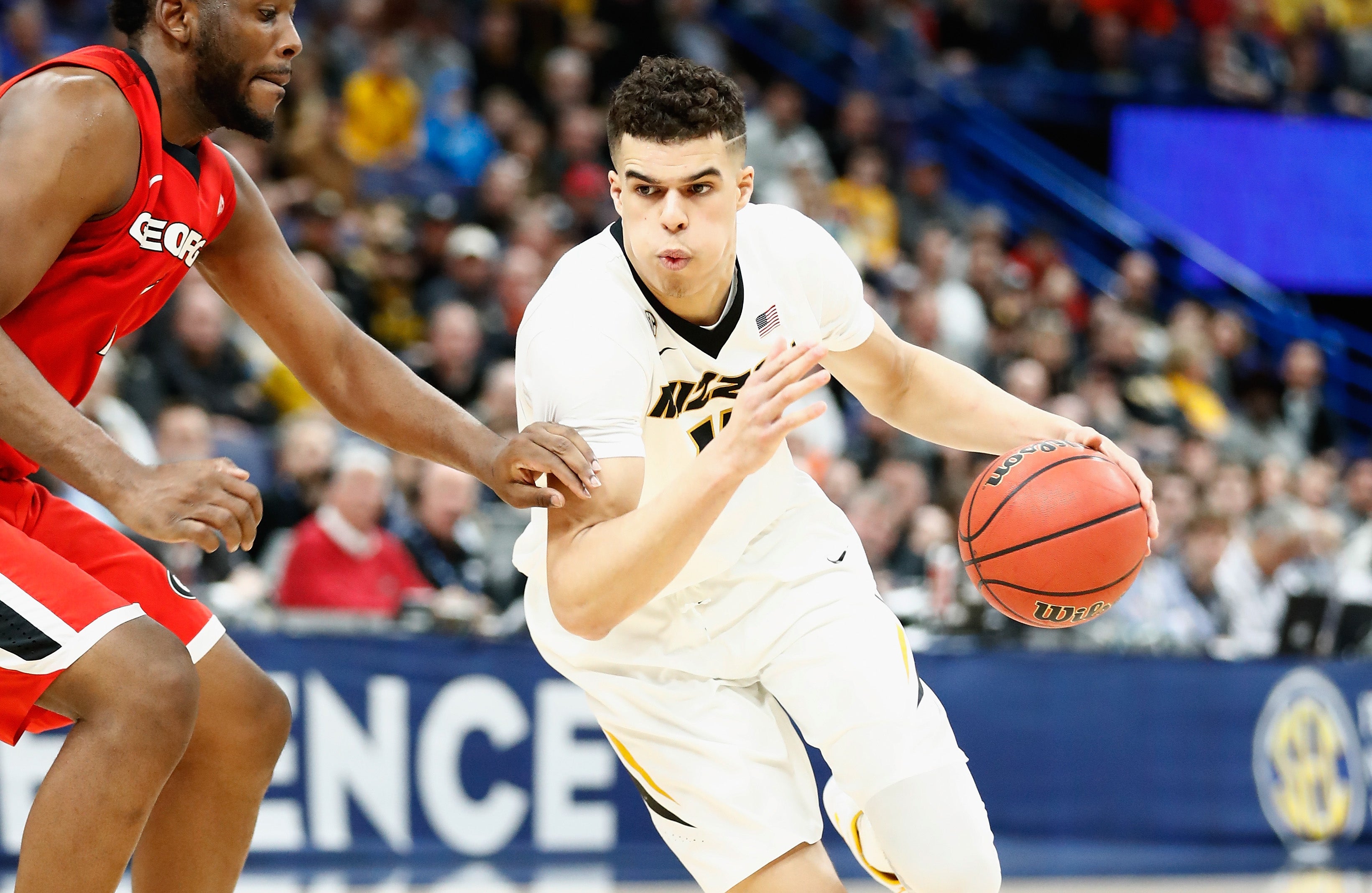 Porter played all of two minutes during the regular season because back surgery kept him on the sidelines until the SEC tournament. He returned to face Georgia, but struggled, connecting on just five of 17 shots for 12 points in a 62-60 loss to Georgia. Still, the 6-10 forward could be the best scorer in next year’s draft. The combination of his size, shooting and overall game have most draftniks projecting him in the top five, perhaps going as high as No. 3.

Jackson is averaging 11.3 rebounds and 5.8 rebounds for the Spartans in just 22 minutes a game. He has continued to expand his game offensively, and at 6-11, has a nice touch on the perimeter that helps to spread out opposing defenses. He was named the Big 10 freshman of the year.

Defensively, he can protect the rim, but is quick enough to occasionally defend small forwards. One of the younger players in the draft, he might land outside the top five, but should be gone within the top 10.

Michigan State (29-4) is the third seed in the Midwest region and will get to stay close to home the first weekend when it plays Bucknell (25-9) in Detroit on Friday at 7:10 p.m. 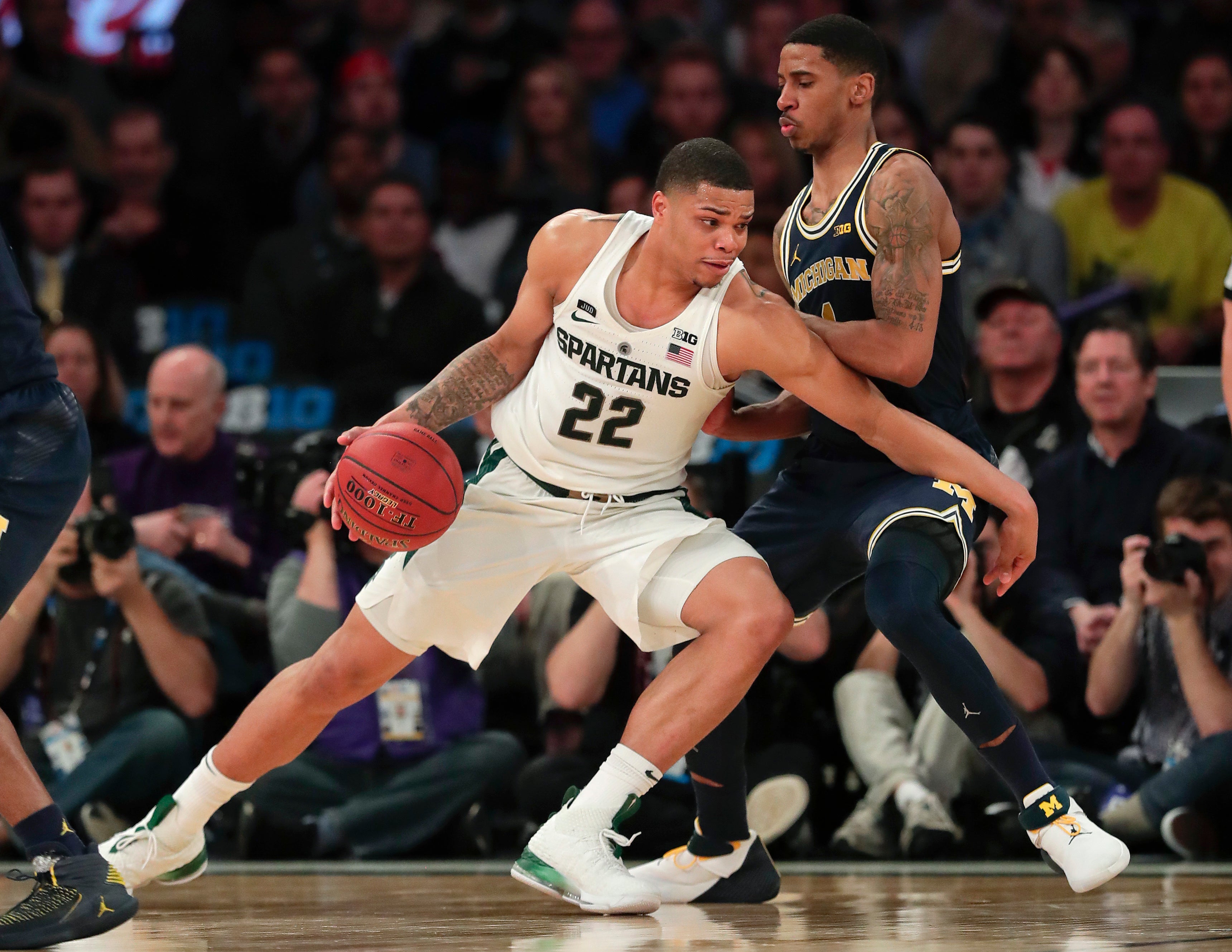 Bridges brings versatility up front, having played both small forward and power forward for the Spartans, and is averaging 16.9 points, 6.9 rebounds, and 2.8 assists. The 6-7 sophomore can also keep opposing defenses honest, shooting 36.9 percent from behind the arc. Last year, Bridges was names Big 10 freshman of the year. He bears watching as Michigan State looks to make a deep run.

As of right now, he is projected to be selected just outside the top 10.

Young was drawing comparisons to Steph Curry at the beginning of the season because of his spectacular shooting range. But as the season wore on, opposing teams appeared to figure out the 6-2 freshman, and Young struggled to adjust.

The hot start is tough to dismiss though, and he still could be a lottery pick.

The Sooners were squarely on the bubble, having dropped eight of their last 10 games, but they got in. Oklahoma (18-13) is the 10th seed in the Midwest and will open the tournament against Rhode Island (25-7) Thursday at 12:15 p.m. at Pittsburgh. 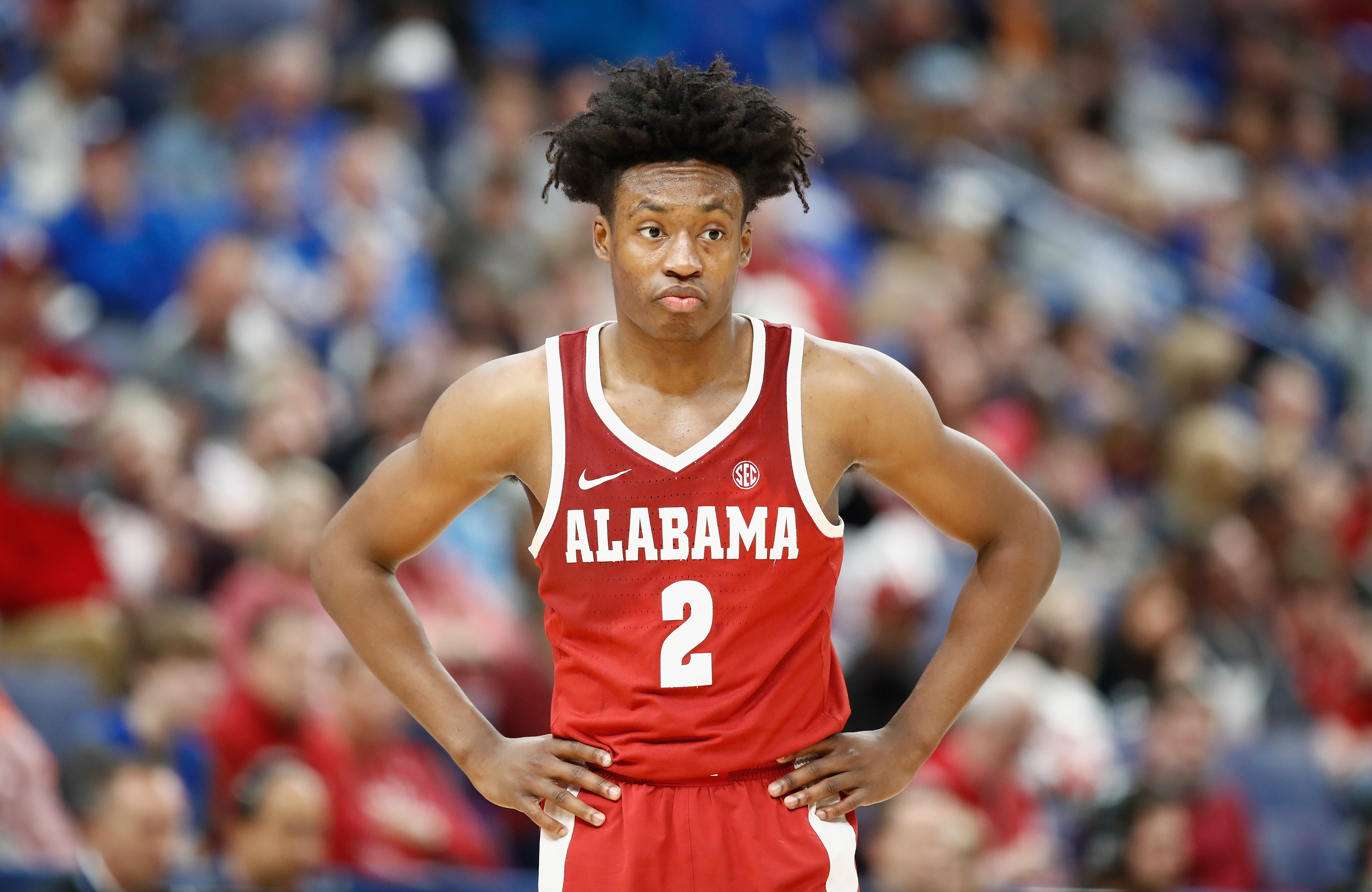 There aren’t many players who had a better week than Sexton. The Crimson Tide were clearly on the outside looking in at the beginning of the SEC tournament, but Sexton’s heroics propelled them to the NCAAs. In the first round against Texas A&M, Sexton’s finger roll at the buzzer kept Alabama alive. The next day in the quarterfinals against first-place Auburn, Sexton took over again, scoring 20 points in the second half as the Crimson Tide rallied from a 10-point deficit at the half to roll to an 81-63 win.

Sexton, a 6-3 freshman, averaged 19 points, 3.8 rebounds and 3.5 assists this season. He was named co-freshman of the year along with Kentucky’s Kevin Knox.

Initially considered a late lottery pick, some projections having him vaulting into the top 10 given his recent success.

The swingman was named the Big East Tournament MVP after Villanova outlasted Providence for the conference championship. Bridges is drawing comparisons to San Antonio Spurs forward Kawhi Leonard, which could land him in the top 10. Not bad, considering two years ago, Bridges’s teammates called him ’’Noodles’’ and “String Bean,’’ in reference to his 6-7, 185-pound frame. Now a junior, Bridges weighs in at 210 pounds and averaged 18 points and five assists. With a 7-2 wingspan, he can be equally dangerous as a defender, too.

Villanova (30-4) is the No. 1 seed in the East region and will play the winner of LIU Brooklyn/Radford on Thursday at 6:50 p.m. at Pittsburgh.