The Christopher Columbus statue that was decapitated over the summer will not be returning to its familiar pedestal gazing over the North End waterfront.

Mayor Marty Walsh announced plans Monday to have the statue displayed instead at an affordable housing development being built by the neighborhood’s Knights of Columbus on North Margin Street, NorthEndWaterfront.com reports.

“It will be visible for everyone who wants to see it,” Walsh said during a virtual meeting of the North End/Waterfront Council, according to WBZ-TV. “It will still be an important part of the fabric of the neighborhood.”

The statue, installed in 1979, was beheaded in June, removed, and put in storage as city officials considered its future. The vandalism came amid efforts nationwide to remove statues considered to be symbolic of colonial oppression and slavery, as calls for racial justice and an end to systemic racism grew following the death of George Floyd at the hands of police in Minneapolis.

But even before this year, the Columbus statue fell prey to vandalism, including when it was decapitated in 2006, and in 2015 when the display was covered with red paint and spray painted with the words, “Black Lives Matter.”

According to NorthEndWaterfront.com, the sculpture is repairable, but even with the fixes there will be visible marks from the damage.

Walsh said Monday the statue — being repaired by the city, which will then turn it over to the Knights of Columbus — will not be “structurally” safe to return it to its prior home in Columbus Park, WBZ reports.

The city will now embark on a “robust community process” to decide on a statue to take the place of the Columbus sculpture — one that will focus on “highlighting the Italian immigrants of the North End,” Walsh said. The Boston Art Commission will convene a community advisory group to provide input on decisions.

“The new statue will highlight the contributions of the North End Italian immigrant community,” the mayor said. “That was the original intent of the statue when it was put up over 40 years ago.”

There is no current discussion on whether the name of Christopher Columbus Park will change, NorthEndWaterfront.com reports.

Bernie Sapienza, a North End resident, was frustrated that vandalism was allowed to dictate the fate of the statue, and over “erasing history,” according to the website.

Walsh said “vandalism and destruction in our neighborhood is never okay.”

“I think this is a good solution, although not perfect for everyone,” the mayor said. “I don’t think we’ll ever get to unanimous 100 percent support of what should happen there.”

A poll of Boston.com readers in June revealed that most would have liked the statue to stay where it was, but other alternatives readers offered included the late Mayor Tom Menino, Boston Massacre victim Crispus Attucks, and former Patriots quarterback Tom Brady. Meanwhile, a petition to replace it with the Route 1 Orange Dinosaur received almost 7,700 signatures.

The city’s Art Commission will discuss the statute and its replacement on Oct. 13. 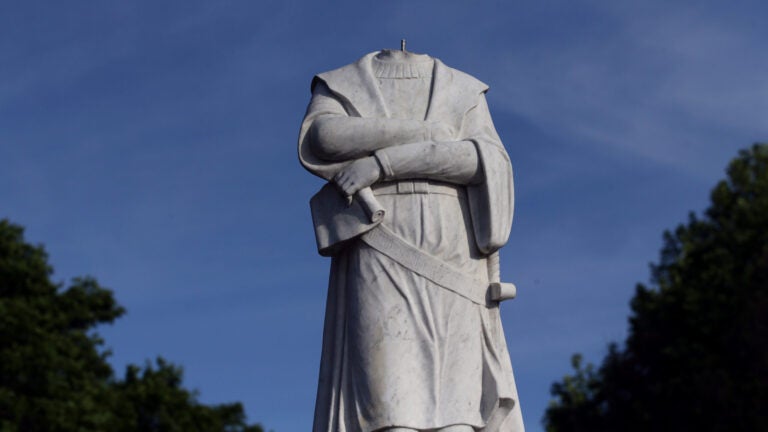 Here’s who should replace the Christopher Columbus statue, according to readers