Miya Brophy-Baermann was speaking to a friend outside a Providence apartment early Sunday morning on Olney Street when gunshots rang out from a passing car.

The young woman was brought to Rhode Island Hospital, where she was pronounced dead, Providence Police Major David Lapatin, commanding officer of the department’s Investigative Division, told reporters the next day.

No arrests had been made as of Monday. Authorities indicated the drive-by shooting appeared to be random.

Lapatin said investigators believe Brophy-Baermann “was not targeted at all, or wouldn’t have been a target.”

“It’s horrible, you know to be such a coward to shoot a gun out of a car like that and take a life is incredible,” he said. “We all feel for the victim as we do for every victim here.”

The homicide came amid a weekend of violence in the Rhode Island capital: Five people were shot and hospitalized early Sunday morning off of Reservoir Avenue, and on Saturday morning, a man was in critical condition after he was stabbed on Atwells Avenue, according to police.

According to Lapatin, police have seen “a lot of guns on the street.”

By this time last year, police had confiscated between 30 and 40 firearms, he said. This year, authorities have already taken in 144 guns, Lapatin said.

“There’s been a lot of gun sales that’s happened during the COVID,” he continued. “People buy, you know, a mass number of guns and then resell them to people that shouldn’t be in possession of them.”

Lapatin said the department had plainclothes officers on the streets near Sunday’s murder scene, knocking on doors in an effort to collect information.

“They will be fanning out over many, many streets and miles looking for evidence to put these people in jail,” he said.

As authorities searched for answers in Brophy-Baermann’s death, her family described the young woman as someone who “always made us smile,” The Providence Journal reports.

“I just think of her as kind of all that’s good in this world — the light,” her mother, Michelle, a political science professor at Rhode Island College, told the newspaper. “She always loves people, she’s outgoing and caring. She always wants to make other people comfortable and help other people.”

Her father, Bryan, described her as “very talented, very accomplished” and “an incredibly loving person.” He said his grief is “immeasurable.”

According to the Journal, Miya Brophy-Baermann was a speech-language pathologist at Lincolnwood Rehabilitation & Healthcare Center in North Providence and was finishing a clinical fellowship there.

She was inspired to enter the field based on the experiences of her paternal grandparents, the newspaper reports. Her grandfather died from ALS when Miya Brophy-Baermann was only an infant.

She earned an undergraduate degree in communication sciences and disorders from the University of Rhode Island before earning a master of science in speech-language pathology from Northeastern University this past May, according to the Journal.

Emma Walker, her sister-in-law, said she was someone who “would always take the more complicated route for herself if it would make somebody else’s life better.”

“There’s this man that she works with every day, and she was this person who would take 45 minutes of her day every single day to slowly feed this patient and talk with him and listen to him about his life so that he didn’t have to get downgraded to pureed food,” Walker said.

Miya Brophy-Baermann’s brother and Walker’s husband, Belamy, told the newspaper he last saw his sister the day before she died as their family visited Manchester, New Hampshire.

He received a call from their mother around 8 a.m. Sunday with news that “just kind of shook me in a way that I’ve never really experienced,” he said.

Speaking to the Journal at his parents’ home on Monday, where his sister most recently lived, he said “everything reminds me of her.”

“The yogurts in the fridge, and finding her laptop, and the cat that she made mom and dad get because she really wanted a friend in the house,” he said.

“It’s just hard being in this moment,” he added. “It’s kind of unbelievable.” 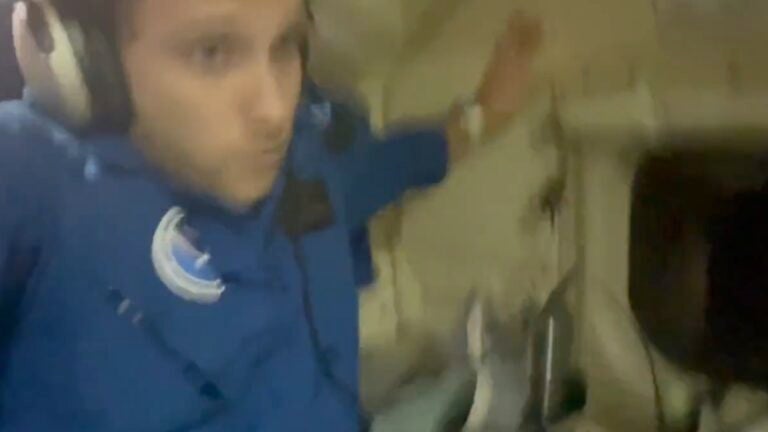 Here's what it looked like on a flight through Hurricane Ian