Worries about heavily indebted Chinese real estate developers — and the damage they could do to investors worldwide if they default — rippled across markets. Investors are also concerned that the U.S. Federal Reserve could signal this week that it’s planning to pull back some of the support measures it’s been giving markets and the economy.

“What’s happened here is that the list of risks has finally become too big to ignore,” said Michael Arone, chief investment strategist at State Street Global Advisors. “There’s just a lot of uncertainty at a seasonally challenging time for markets.”

The worries over Chinese property developers and debt have recently centered on Evergrande, one of China’s biggest real estate developers, which looks like it may be unable to repay its debts.

The fear is that a potential collapse there could send a chain reaction through the Chinese property-development industry and spill over into the broader financial system, similar to how the failure of Lehman Brothers inflamed the 2008 financial crisis and Great Recession. Those property companies have been big drivers of the Chinese economy, which is the world’s second-largest.

If they fail to make good on their debts, the heavy losses taken by investors who hold their bonds would raise worries about their financial strength. Those bondholders could also be forced to sell other, unrelated investments to raise cash, which could hurt prices in seemingly unrelated markets. It’s a product of how tightly connected global markets have become, and it’s a concept the financial world calls “contagion.”

Many analysts say they expect China’s government to prevent such a scenario, and that this does not look like a Lehman-type moment. Nevertheless, any hint of uncertainty may be enough to upset Wall Street after the S&P 500 has glided higher in almost uninterrupted fashion since October.

Besides Evergrande, several other worries have been lurking underneath the stock market’s mostly calm surface. In addition to the Fed possibly announcing that it’s letting off the accelerator on its support for the economy, Congress may opt for a destructive game of chicken before allowing the U.S. Treasury to borrow more money and the COVID-19 pandemic continues to weigh on the global economy.

Regardless of what the biggest cause for Monday’s market swoon was, some analysts said such a decline was due. The S&P 500 hasn’t had even a 5% drop from a peak since October, and the nearly unstoppable rise has left stocks looking more expensive and with less room for error.

All the concerns have pushed some on Wall Street to predict upcoming drops for stocks. Morgan Stanley strategists said Monday that conditions may be ripening to cause a fall of 20% or more for the S&P 500. They pointed to weakening confidence among shoppers, the potential for higher taxes plus inflation to eat into corporate profits and other signs that the economy’s growth may slow sharply.

Even if the economy can avoid that worse-than-expected slowdown, Morgan Stanley’s Michael Wilson said stocks could nevertheless drop about 10% as the Fed pares back on its support for markets. The Fed is due to deliver its latest economic and interest rate policy update on Wednesday.

Earlier this month, Stifel strategist Barry Bannister said he expects a drop of 10% to 15% for the S&P 500 in the final three months of the year. He cited the Fed’s tapering of its support, among other factors. So did Bank of America strategist Savita Subramanian, as she set a target of 4,250 for the S&P 500 by the end of the year. That would be a 4.1% drop from Friday’s close.

Banks posted big losses as bond yields slipped. That hurts their ability to charge more lucrative interest rates on loans. The yield on the 10-year Treasury fell to 1.31% from 1.37% late Friday. Bank of America fell 3.4%.

Airlines were among the few bright spots. American Airlines rose 3% to lead all the gainers in the S&P 500. Delta Air Lines rose 1.7% and United Airlines added 1.6%.

Cryptocurrency traders also had a rough day. The price of Bitcoin fell nearly 8% to $43,717, according to Coindesk.

Investors will have a chance for a closer look at how the slowdown affected a wide range of companies when the next round of corporate earnings begins in October. Solid earnings have been a key driver for stocks, but supply chain disruptions, higher costs and other factors could make it more of a struggle for companies to meet high expectations.

“The market’s biggest strength this year could become its biggest risk,” Arone said. 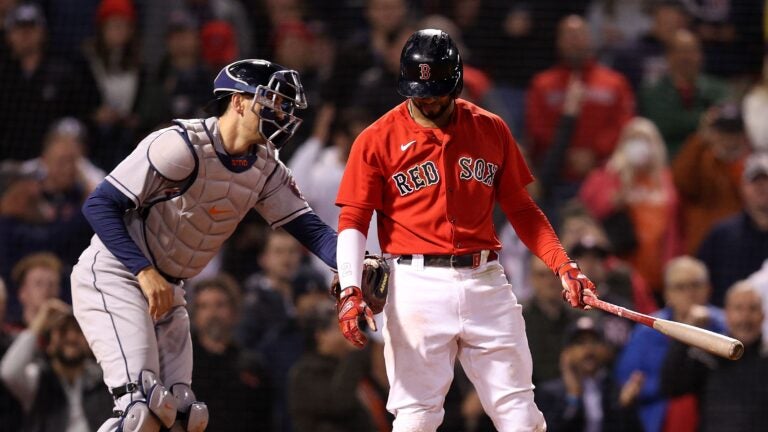