I wouldn’t blame you if you were tired of hearing about fried chicken sandwiches.

I was. At the end of 2019, I felt like I couldn’t get through the day without someone talking about Popeyes now-infamous fried chicken sandwich — how it was better or worse than expected, how they’d waited in line for an hour, how oh, by the way, did you hear someone got stabbed over it? Article after article was written about the sandwich that broke the internet, which only made me want to avoid it, or at least wait until the hype died down (Spoiler alert: It hasn’t really died down). 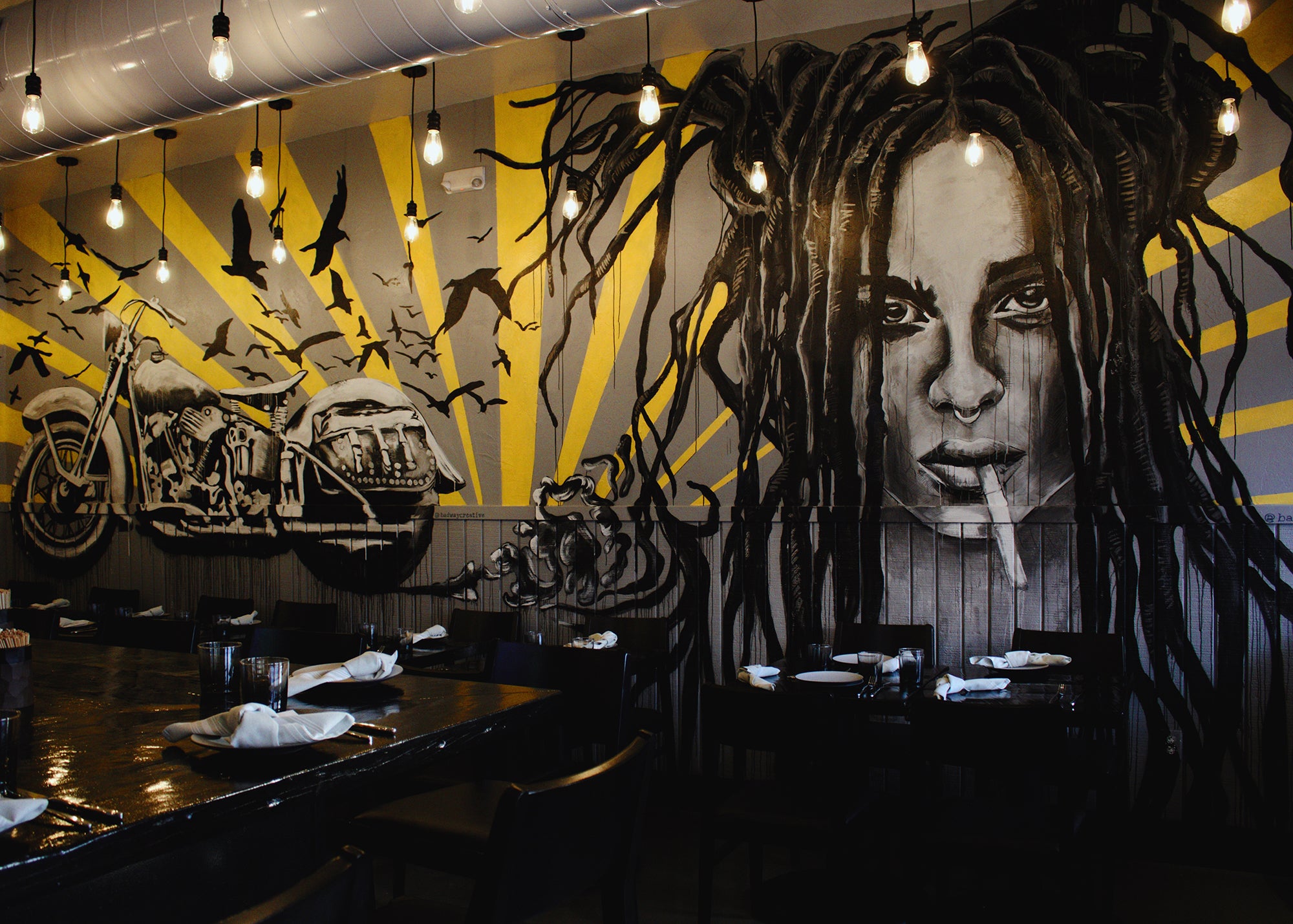 But here we are in 2020, and now I’m the one who can’t shut up about a fried chicken sandwich: The one at Pollo Club, which opened in Waltham at the end of October. Pollo Club sits next to local favorite Moody’s Delicatessen & Provisions — it’s owned, in fact, by the same team, and took over the former El Rincon de Moody’s space — and is both smaller and darker than you might imagine. A black, grey, and yellow hand-painted mural from artist Sam Malpass looms over black tables, black chairs, and a black bar. Who knew you could discover a stellar fried chicken sandwich in a place that can only be described as gothic chic?

It’s not just that the chicken is excellent, which it is — fall-apart dark meat is dusted with an aromatic blend of spices, and the shell is more mild crunch than shatteringly crispy. Anyone hoping for even more textural contrast will find it on top of the chicken: Between a soft brioche bun, bread and butter pickles are piled above herbed coleslaw, both lending acidity and crunch to the dish while a dash of #7 Hot Sauce brings the heat. Beneath the chicken, a spread of soft and delightfully tangy pimento cheese; on the side, a pile of sweet potato chips that we devoured in minutes. It’s a fried chicken sandwich ($12) worth driving out of your way for (though, let me be clear, not worth fighting anyone in line for, because no sandwich is worth stitches). 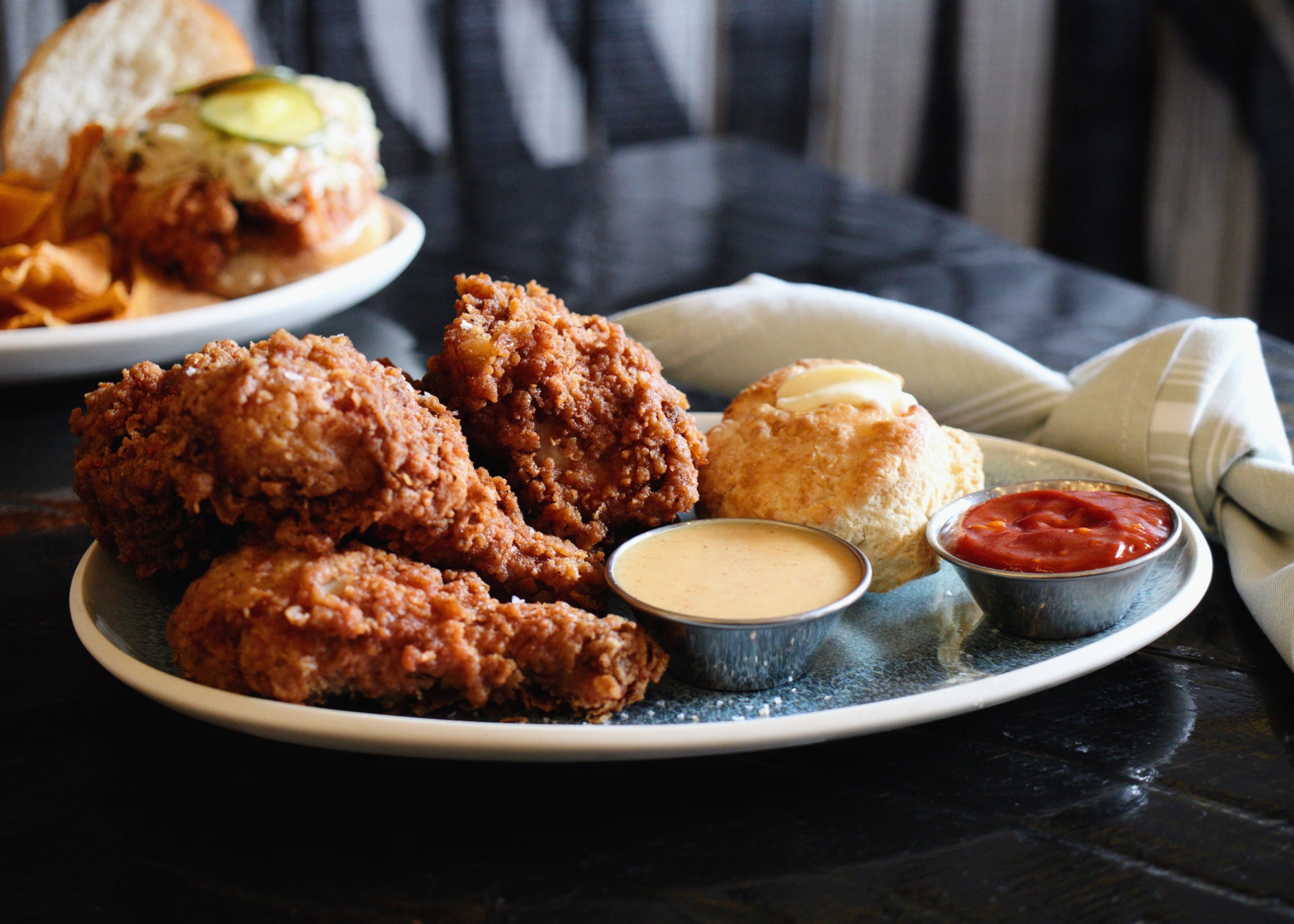 Outside of the sandwich, Pollo Club’s chicken is given a crispier treatment, with fried batter that easily crumbles after each bite. Choose your own adventure between tenders, thighs, half breasts, drumsticks, and wings; dark or white meat; or, if you’re going all out, a platter or half rotisserie chicken dinner. My dinner companion and I opted for two large thighs and two drumsticks ($17), both dark meat, with Korean BBQ sauce and honey mustard chosen among six available sauces (I’m coming back to try the Hot AF sauce). The only disappointment lay in the exceedingly dry biscuit that accompanies every chicken plate; even when dipped in sauce, we couldn’t seem to rally behind it. 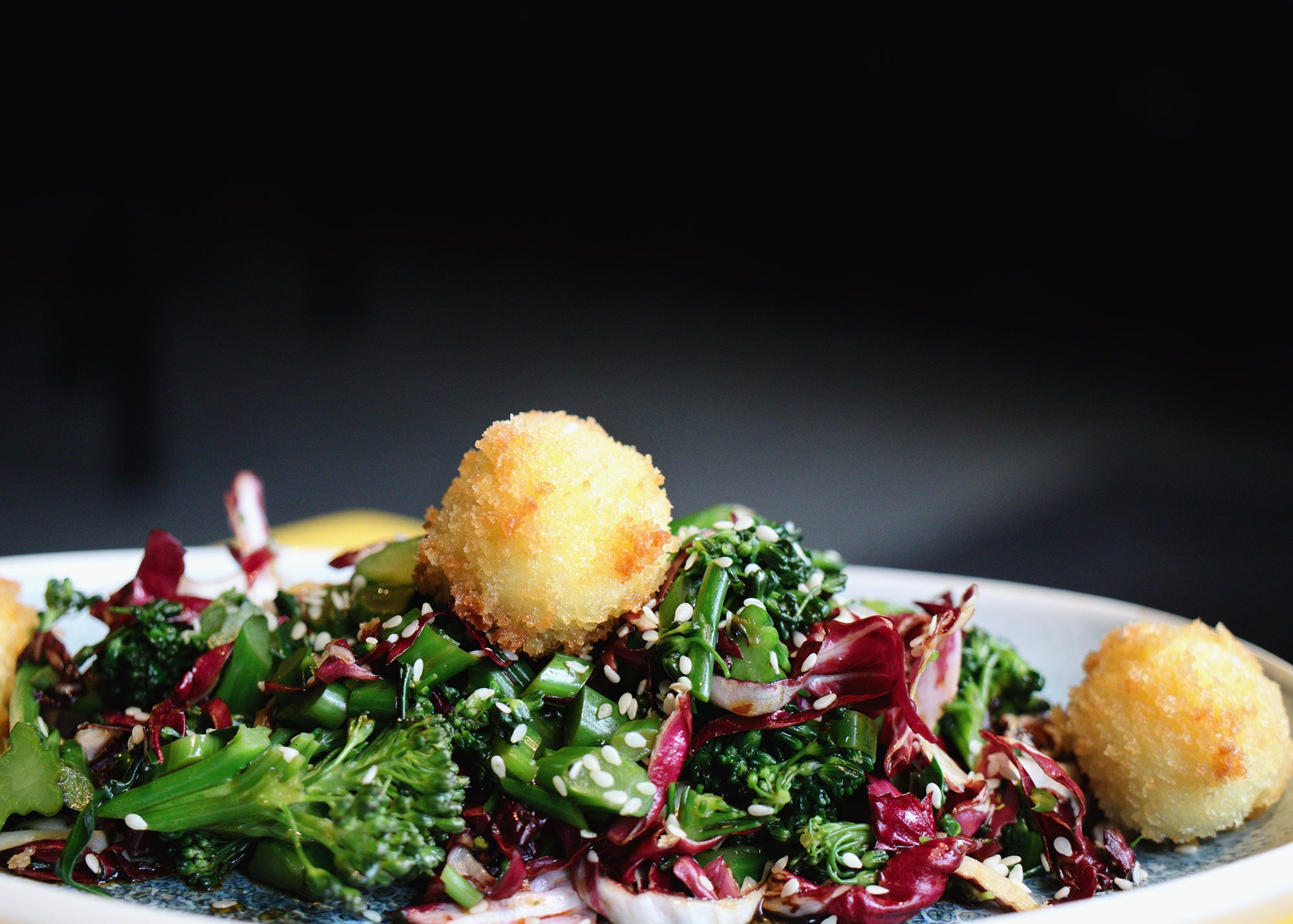 Executive chef Jeff Howe designed the menu at Pollo Club (and at The Backroom at Moody’s, which recently overhauled its menu), and there are some pleasant surprises — namely, the broccoli slaw and goat cheese fritters ($11). Here, a mashup of shredded cabbage and broccoli is dressed in a vibrant ginger sesame soy vinaigrette and decadently punched up with fried balls of goat cheese. There are other vegetables on the snacks section of the menu — black eyed peas ($10), country collard greens ($6), beets and pickled mangos ($10) — but the Asian-inspired salad is intoxicating. For something more decadent, Pollo Club’s gruyere mac and cheese ($6) is a classic comfort side — what could go wrong with cavatelli smothered in cheese? 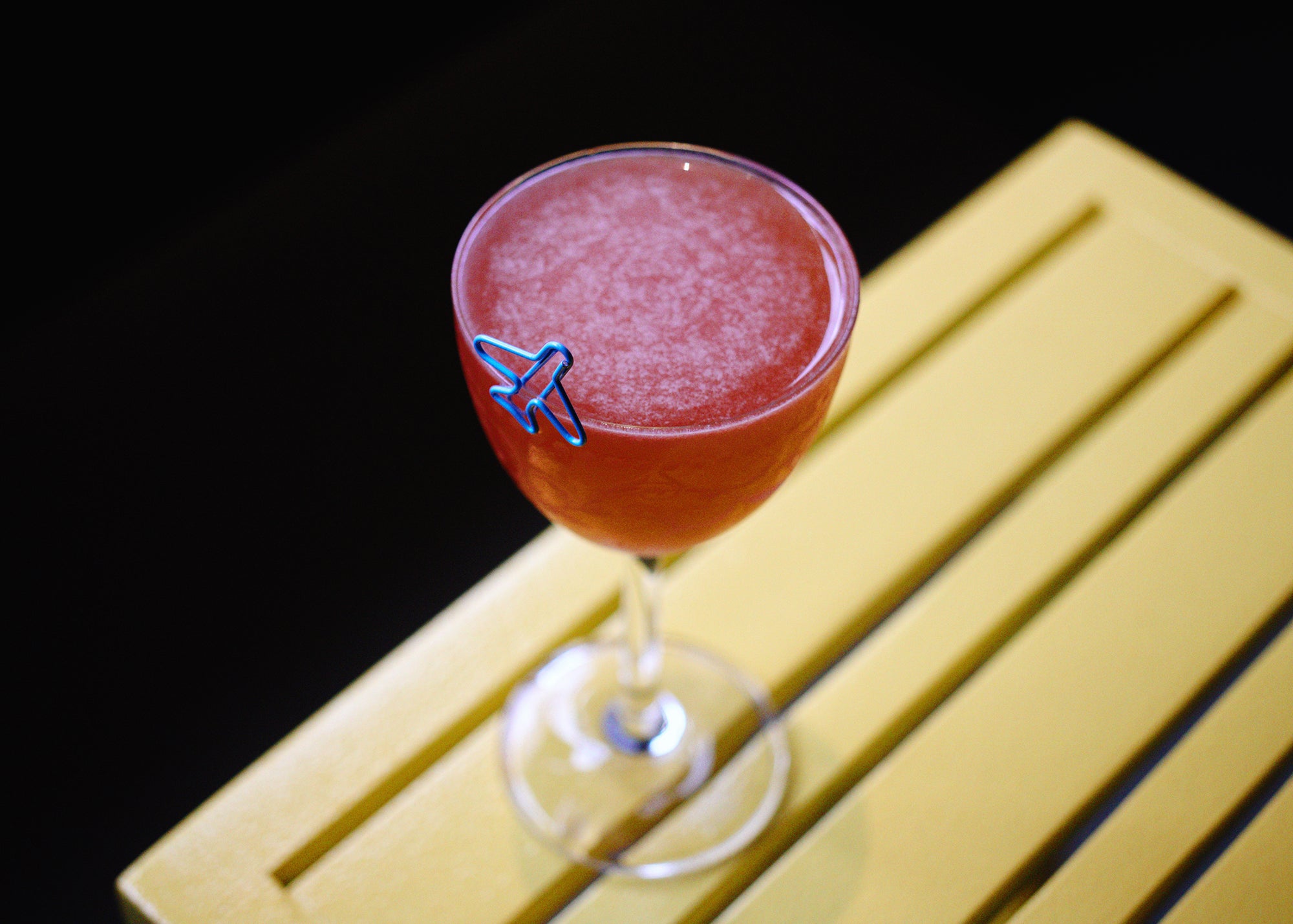 Fried chicken and bubbly are a well-worn pair, and Pollo Club has a list of sparkling wines and rosés by the glass and bottle. An equal matrimony? Mezcal, apparently, which I discovered by ordering The Mile High Club ($14), a cocktail made with mezcal, Aperol, house allspice dram, and lime, plus habanero hellfire bitters for an extra kick. At the bar, which takes up a sizable portion of the dining room, I saw solo diners hunched over their chicken with cans of Narragansett and Miller High Life; New England craft beers, like Lamplighter’s Birds of a Feather and Hermit Thrush’s Party Guy, can also be found on the drink menu. 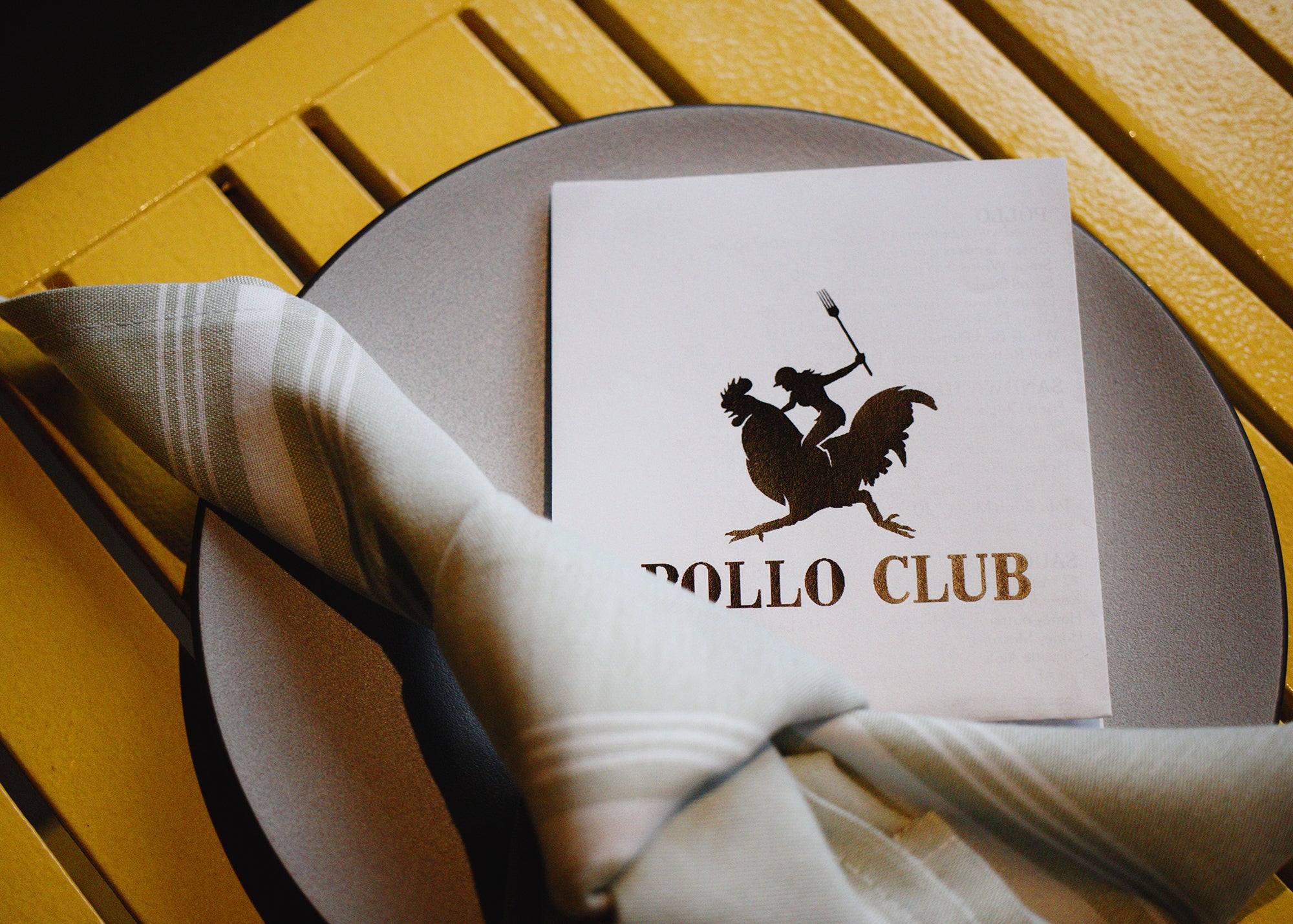 As the evening drew on and Pollo Club’s dimmed room grew even darker, we spooned up sticky marshmallow and chocolate ganache and graham crackers from the S’mores Jar ($4.50). At the table next to us, two families with wildly energetic children started to craft their own chicken platter, debating the merits of chicken thighs versus legs, white meat versus dark meat. Beers were ordered, glasses of wine poured. I wanted to tell them about the fried chicken sandwich, but they had too many opinions to placate without my unsolicited input.

I’ve thought about that sandwich multiple times since our visit, a reminder that you can’t always escape the zeitgeist. So if the reign of fried chicken sandwiches continues into 2020, I guess I’m here for it. Especially if they’re all as good as the one at Pollo Club.

Correction: A previous version of this story incorrectly stated the S’mores Jar dessert was no longer on the menu. Boston.com regrets the error.

'I got to do better': Jaylen Brown focuses on turnovers instead of 40-point performance