It was dark. It was cold. And all I wanted was something to warm me up.

Those were the basic, but pressing, circumstances of my most recent visits to Gantetsu-Ya, a Japanese street food-focused nook that opened in Brookline in late summer. Tucked away inside Coolidge Corner’s Arcade Building, a commercial structure built in the 1920s that is also populated by an optician’s office, a tailor, and a hair salon, the restaurant sits across from its sibling Ganko Ittetsu Ramen. Both are run by chef-owner Ken Iwaoka, who has showcased his Japanese snacks at the Boston Japan Festival, and while the two face each other, they’re certainly not twins. Ganko Ittetsu focuses on Sapporo-style ramen; Gantetsu-Ya serves just two kinds of street food: takoyaki and okonomiyaki. Ganko Ittetsu serves beer and cider; Gantetsu-Ya offers non-alcoholic drinks (water, soda, and juice) displayed in a small refrigerator by the cashier. There is a perpetual line of diners waiting for a seat at Ganko Ittetsu, which seats roughly 20; each time I have visited Gantetsu-Ya, a tiny space with three tables, there has never been a line. There should be one. 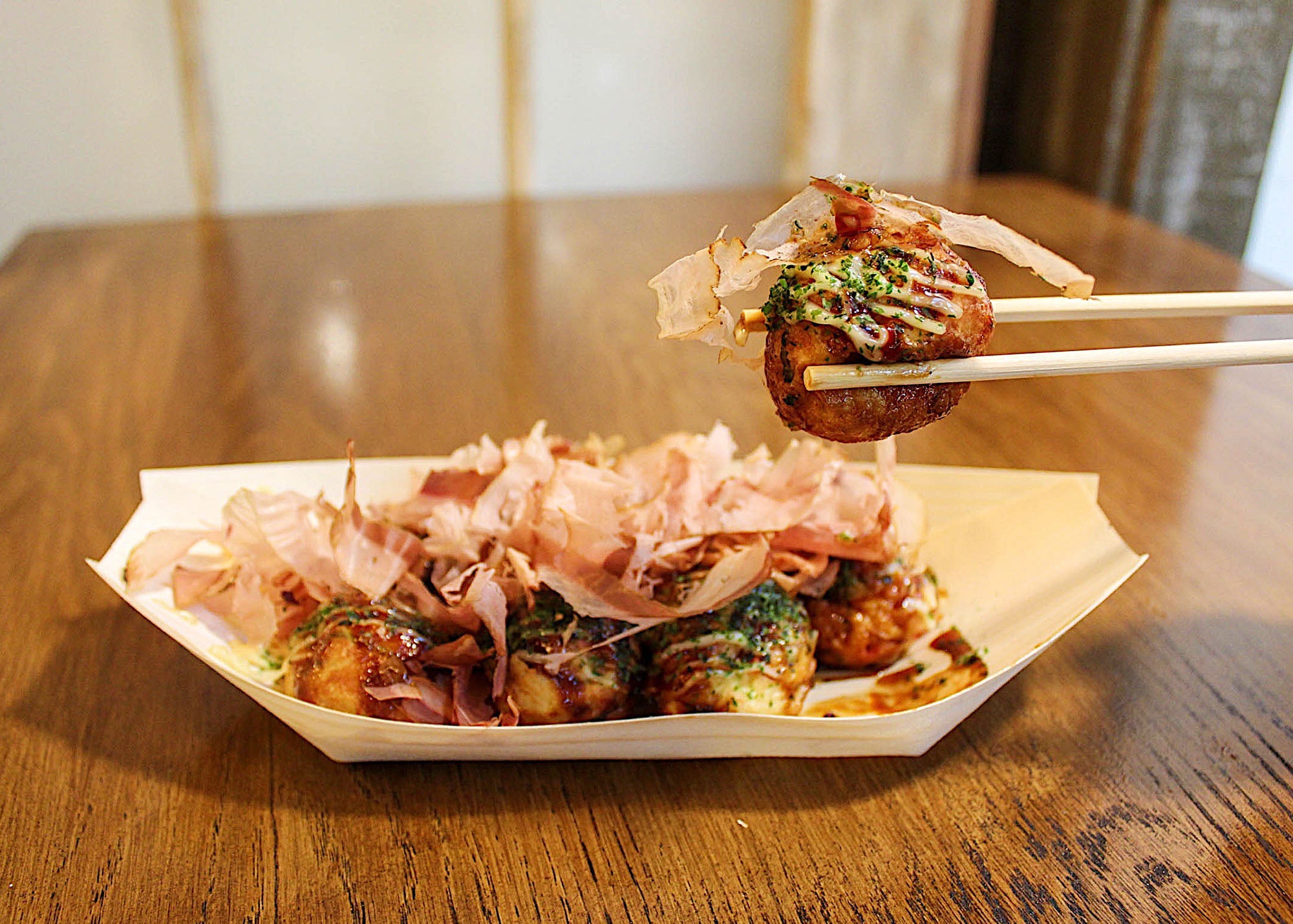 With such a hyper-specific menu, Gantetsu-Ya needs most, if not all, of its dishes to shine in order for the place to succeed. Fortunately, they do. An order of takoyaki — eight balls made from wheat-based batter that have been poured into molds, filled with bits of octopus, and fried— arrives in a paper boat, piping hot and topped with a riotous medley of ingredients: sprinkles of nori powder, sweet takoyaki sauce, and paper-thin curls of bonito flakes. It’s an enormous snack for one, or a reasonable snack for two. With Japanese pop music playing in the background, I bit into a ball and its custard-like batter immediately melted, a single, tender piece of octopus revealing itself like a pearl in an oyster shell. As phenomenal as it is, do not make the same mistake I did and fill up on takoyaki — you’ll need room for Gantetsu-Ya’s star: Hiroshima-style okonomiyaki.

Maybe you’re like me and have only tried Osaka-style okonomiyaki, a pancake-esque snack that takes an everything-but-the-kitchen-sink approach. In the Osaka style, the ingredients (flour, eggs, shredded cabbage, perhaps seafood or meat) are all mixed into a batter, grilled, and topped with a variety of condiments (Hojoko serves it this way, as does Ittoku and a few other places around Boston). But Hiroshima-style okonomiyaki is layered, with a foundation of stewed cabbage followed by pan-seared noodles, bean sprouts, eggs, and various forms of protein, all piled high and, at Gantetsu-Ya, topped with scallions, sesame seeds, and Otafuku sauce, an okonomiyaki dressing that uses dates to give it a sweet profile. 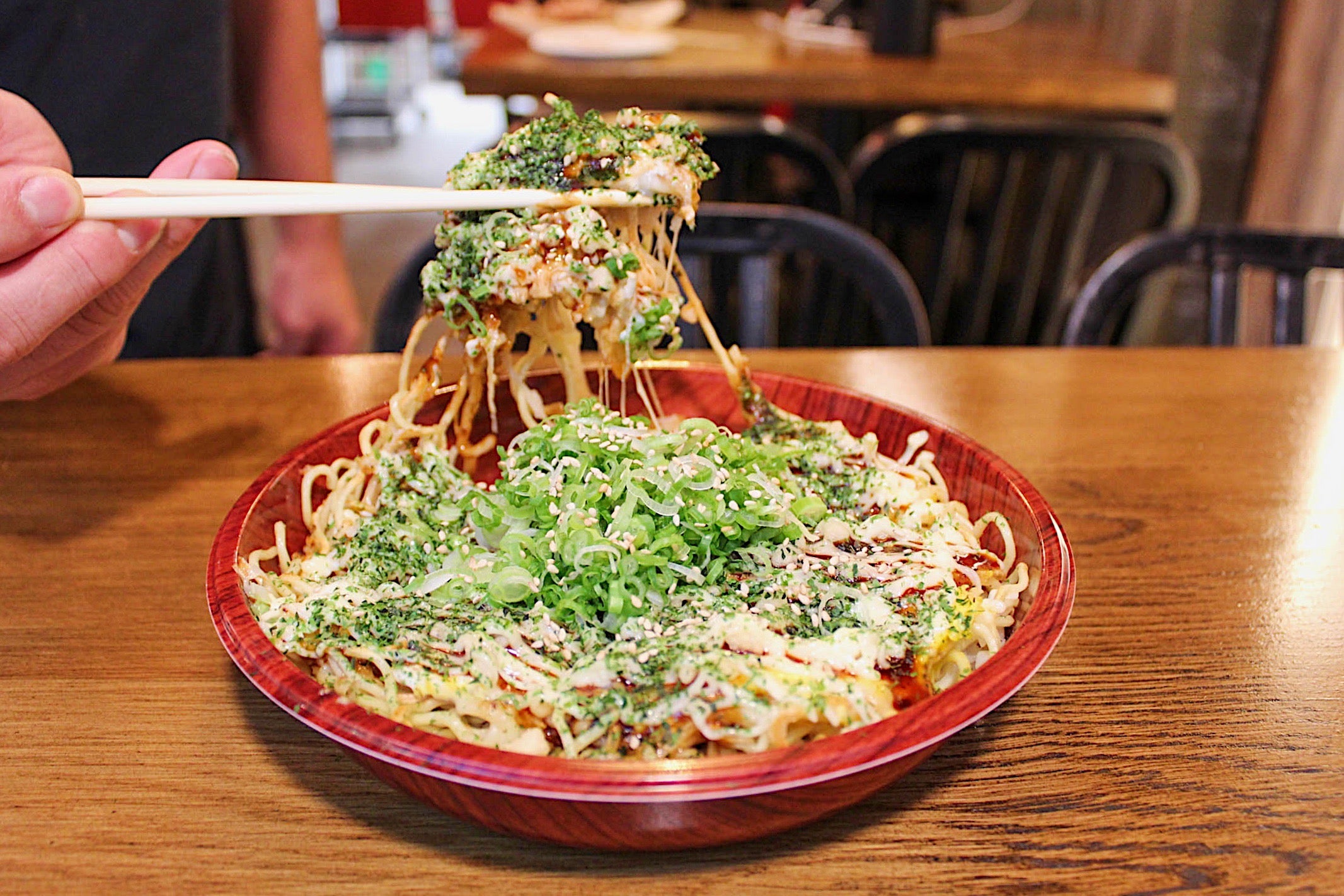 You could start with the original, which features sliced pork belly, but the seafood okonomiyaki is fantastic. In addition to the fatty slices of pork that factor into most of the okonomiyaki options here (a veggie version, which can also be made without butter and egg, is the only exception), grilled squid and shrimp top the tangle of noodles, resulting in sweet, savory, umami-rich bites. Gantetsu-Ya calls this “snack food,” but it’s a lot, and it’s heavy. You won’t leave hungry.

An even heartier pick (and the bowl that warmed my bones the most): The mayo-chee okonomiyaki, which mimics the original but is bound together with melted American cheese. It’s a gooey, beautiful, stringy mess. On one of my visits, a negi-mayo variation was also listed on the menu, featuring extra scallions and mayonnaise. Healthy fare, this is not.

Iwaoka plans to expand the menu at some point with appetizers and other snack options, and while I don’t think Gantetsu-Ya necessarily needs anything else, I’m excited to see what other dishes it will champion. As it is, I love it here, this ultra-niche street food shop in a quirky Brookline building where you can get a haircut and your pants hemmed and fill up on takoyaki in one fell swoop. I won’t need the excuse of hiding out from the cold to come back. 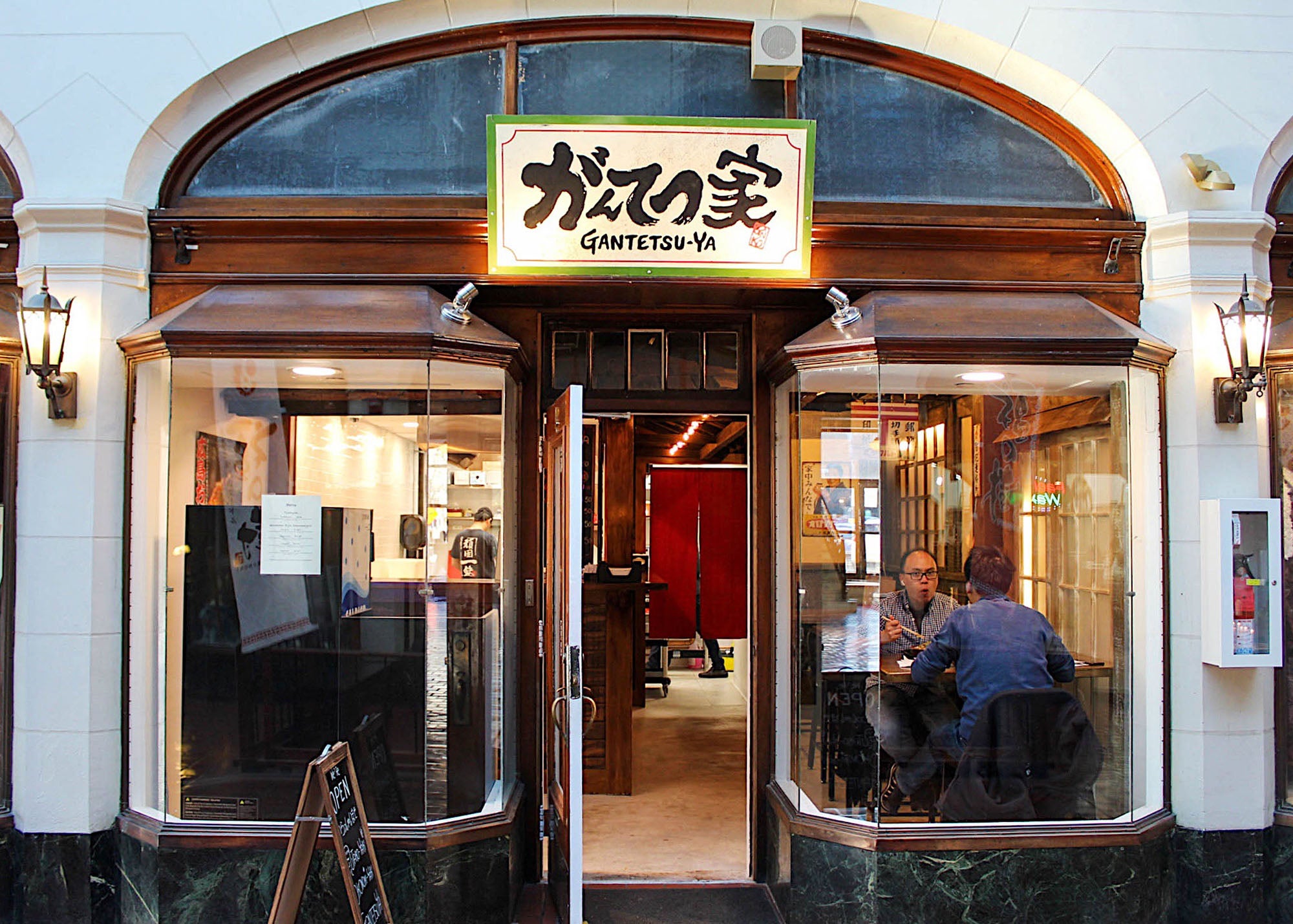 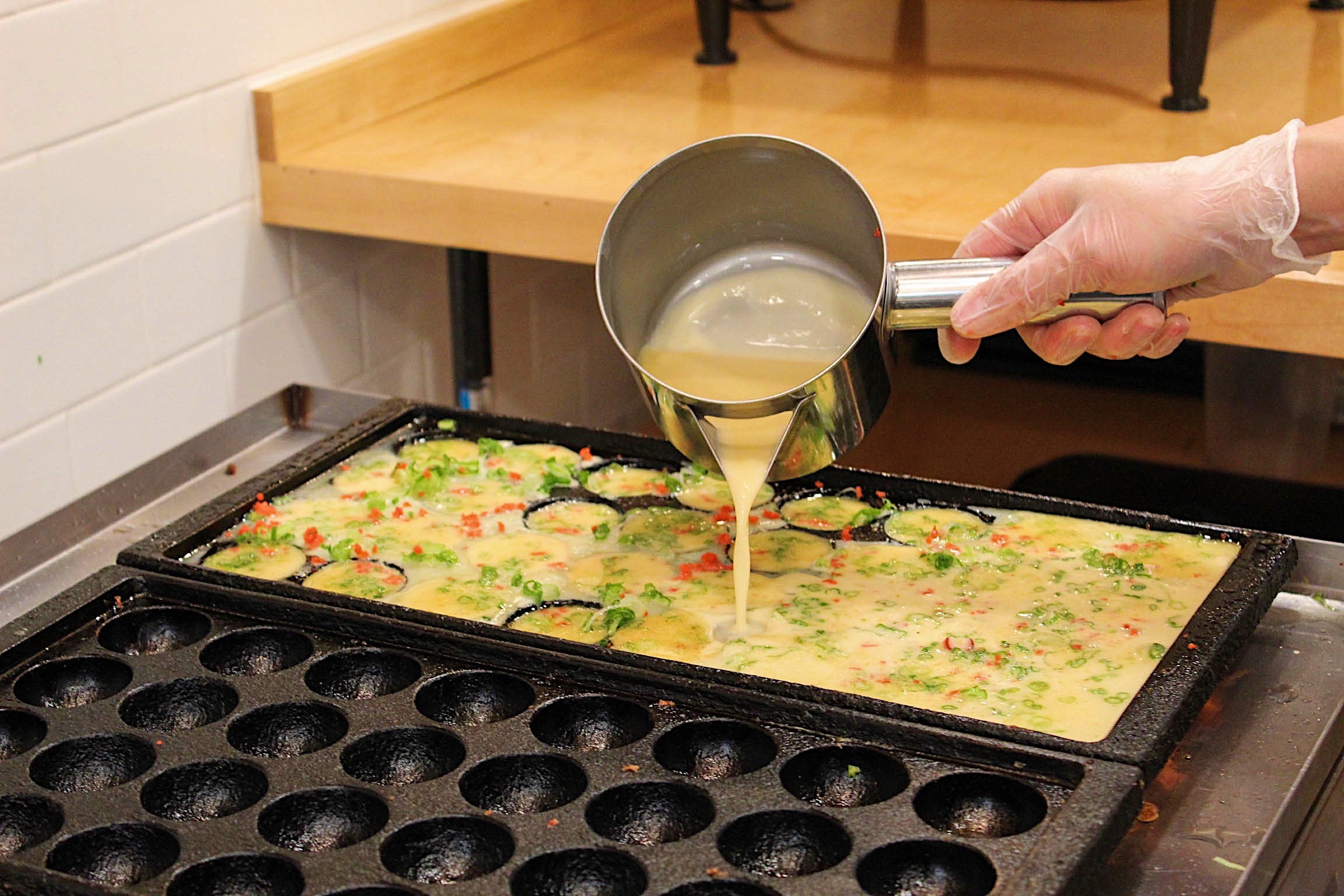 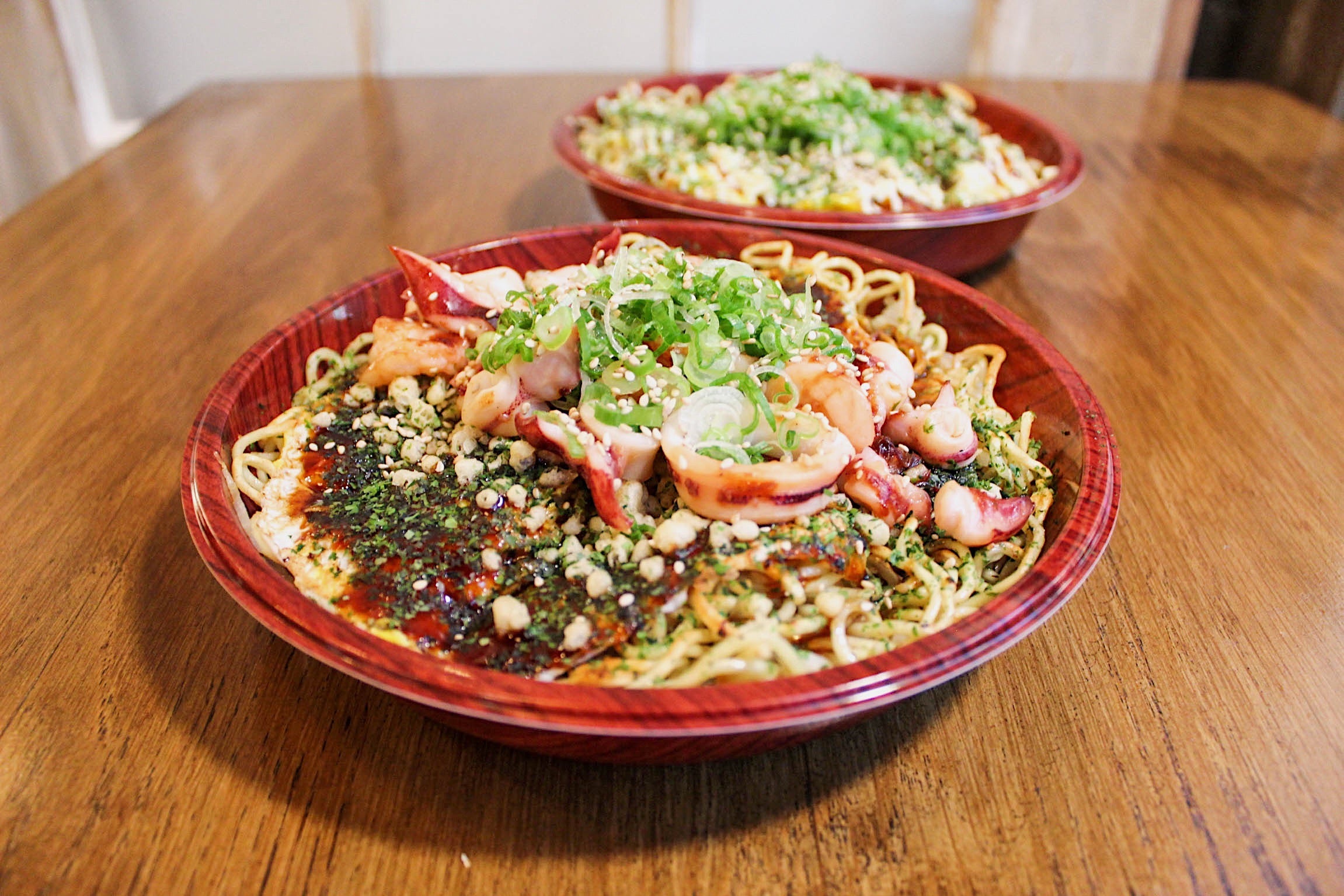