Andrew W.K. performs at Boston’s House of Blues in December.

Boston is no stranger to pay-to-play. Just last year, the local beer community was shaken up over controversies involving breweries paying for lines at some restaurants and bars. Now, the city’s music scene is the latest to turn ugly over this business model.

Just over a week later, the show is already sold out, but within hours of its initial announcement, many within the local music community flooded the Facebook event page with stories about Keynote (most of which promoter Richard Collier has since removed), many referring to his pay-to-play model. While Collier claimed through his own Facebook posts that this specific show will not use such a pay structure, he said he uses it for other shows. 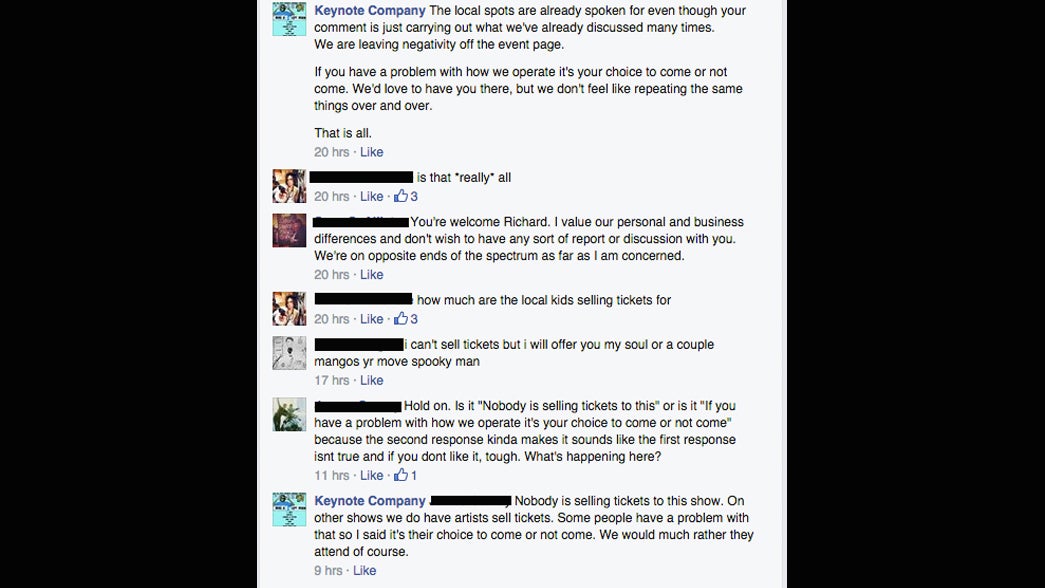 Some even notified Andrew W.K. of how they understood Keynote to operate. Again, Collier was quick to remind that this particular show was not using that booking model.

“The whole model of it is, [a promoter will say] you can play this show and you need to sell 20 tickets at 15 dollars,’’ says Casey Herz, an independent concert promoter and music video director. “If you don’t sell those 20 tickets at 15, you, the artist, have to pay back that difference. Say you only sell 10 tickets, you have to pay 150 dollars to the venue [or promoter] to compensate.’’

Herz, who has booked roughly 200 shows in Connecticut and Boston for both venues and houses, believes that the practice “totally defeats the idea that music is a community.’’

“It’s a scheme,’’ he says. “Not only do you lose all of this money if you don’t sell the tickets, but you just dread it. Your reputation goes on the line because you couldn’t sell these other tickets.’’

Keynote isn’t the only company using pay-to-play when booking shows, but it is the latest to gain an unfavorable response from the local music community.

Gray Bouchard, of garage rockers Salem Wolves, explains a recent experience with Keynote at Simons 677 in Providence opening for Michale Graves, of The Misfits. After announcing the show, Keynote posted to Facebook asking for bands to submit for consideration to open the show. Once selected, the band received the following messages from Collier:

Sorry I was away in NJ at Skate & Surf Fest this past weekend. Catching back up now.

Here is what we came up with due to the demand of the show.

Let me know if this arrangement can work for you and hopefully it does.

We do NOT want anyone to be paying us any money out of pocket – we do expect each act will work hard to promote to their fanbase so they are getting a great crowd/show as well as making some money.

As I said to Damnation, we hate to sound strict but we want this show to go over really well and with working with new bands on national act shows this is the easiest form for us.

Unfortunately time and again this past year, bands have told us they would draw x amount to fall significantly short so we’ve been working this way now. Once we establish a relationship we are open to working things differently of course!

Hopefully you can understand where we are coming from and we hope to work with you on this show.

Tickets are in and can be mailed out asap.

Collier spelled out the deal very clearly, but Salem Wolves were not interested in it, politely declining and expressing their interest to work with him again under different circumstances.

“You have five bands opening and what is spelled out there is that, at most, you can make $50, assuming you recoup your deposit,’’ says Bouchard. “Pay-to-play isn’t illegal and shouldn’t be. If people feel strongly this is a model that works, more power to them. But in a medium that is already stacked way against an artist getting compensated for their work, it just feels like a nasty grift.’’

The drummer of former metal band Sciomancy, who prefers to go by J.P., shares a similar experience of working with Keynote for a show at DV8 in Providence opening for a touring band on a Sunday night.

“I asked him if we’d get paid and he said the first 15 tickets we sold would go to him, and then we’d start making money,’’ J.P. explained in a message. “Of course, with it being a Sunday night, it was difficult to find enough people to meet that quota. We only sold 10 tickets. At $10 a ticket, we had accumulated a total of $100, all of which Rich pocketed. We [the band] didn’t see a single cent.’’

Make no mistake, the bands were put on full notice of the deals ahead of time, but each band came away from the experience concerned about the ethics of the model. Keynote isn’t the only third-party promoter in Boston using this method, and for acts who crave exposure over money, he says that it isn’t often an issue.

“The only model of anyone paying to play on our show is if they take a commitment on a national show and are short tickets and put that money in to honor their agreement/commitment to the show,’’ Collier writes in a message. “When we pick artists for our ticket shows, we point out that we never want an artist to pay out of pocket and it’s more about the draw than the money. Sometimes on that note they will put [payments down] on tickets, but that’s always to be reciprocated back — and in an ideal world — and then some, so they make money on top for their efforts as well.’’

Ideally, the acts on any show would feel some responsibility to get people to their shows. For Collier, this ensures the bands will help to promote, and he believes that if they do so effectively, then they have the opportunity to make money.

“I personally do not believe selling tickets or a down payment are pay-to-play when they get the money back and can make money as well. I personally believe and see that most of our artists (and even those that are against me) are just happy to play shows regardless of money,’’ says Collier.

Much like being in a band, making significant money as a third-party music promoter is not an easy feat. But many, including Herz, feel as though it shouldn’t be looked at as a money-making venture first and foremost.

“As a third-party promoter, you’re essentially a liaison for the music community,’’ he says. “The promoter fees that I would put into it, nine times out of 10 I would not get that money back. But for me, it was just a personal thing, I’m not going to send any bands off without money for food and a tank of gas. To me, that’s almost immoral.’’

Despite some musicians losing money on Keynote shows, Collier sees his model in a different light. He believes that Keynote also exists to help musicians.

“I feel we do our best to support our artists, but due to recent internet backlash, it’s clear others feel otherwise,’’ says Collier. “I welcomed anyone who felt slighted to reach out direct to clear the air. Not a single artist has, though. With the amount of volume we do these days it’s hard to please everyone, but those that know me know I always try to do the best I can.’’