Pick by pick, President Joe Biden aims to assemble an administration so diverse that it will “look like the country.” Yet what about the prominent visual critics who will be mocking his White House and Cabinet — will they, too, be a wide-ranging representation of the nation?

Whither the women and LGBTQ political cartoonists and creators of color on staff at mainstream American newspapers?

Matt Lubchansky, a queer nonbinary cartoonist for the Nib who was a Herblock Prize finalist last year for work reflective “of a new generation,” is among the artists considering that question.

According to the Association of American Editorial Cartoonists, the Biden-Harris White House is being visually satirized in mainstream U.S. papers mostly by White men — by a wide margin. The AAEC estimates that fewer than 30 staff newspaper jobs remain for full-time editorial cartoonists. None of those positions is held by a woman, according to industry experts, and Michael Ramirez of the Las Vegas Review-Journal and David G. Brown of the Los Angeles Sentinel are two of the rare American political cartoonists of color who have a dedicated paper.

Many women and LGBTQ cartoonists and creators of color are published through contract and freelance work or in online outlets and alternative media, but the imbalance persists across much of mainstream editorial cartooning.

“I would love to see a diverse group of cartoonists get to equally spoof and satirize the most diverse presidential cabinet of all time,” says Lalo Alcaraz, a 2020 Pulitzer finalist, whose political cartoons and Latino-themed comics are distributed by Andrews McMeel Syndication. He emphasizes that there’s “a lot of untapped minority talent out there.”

Sage Stossel, a Boston-area editor-artist whose political cartoons have been published by the Atlantic and the Boston Globe, thinks that “empathetic, open-minded cartoonists can comment thoughtfully about issues” even if the subject matter is outside their personal experience. Yet, she says: “It’s probably also true that having such pronounced homogeneity on staffs means that important angles are being missed.”

Pia Guerra, the graphic novelist turned viral political cartoonist, says that journalistic blind spots arise when media decision-makers don’t have backgrounds directly familiar with systemic violence. “You don’t notice the red flags as easily, if at all,” says Guerra, who publishes on the Nib and to her social media accounts.

“If you’re surrounded by other White guys all with the same limited view, the perspective remains skewed, the media produced is skewed and a big chunk of your audience gets alienated,” says Guerra, who identifies ethnically as mixed.

Editorial artwork involving race regularly sparks controversy. In May, for instance, Clay Jones created a syndicated cartoon in response to the fatal Georgia shooting of unarmed Black jogger Ahmaud Arbery, after he was pursued by White men in a pickup truck. In Jones’s art, then-President Trump and a supporter are in a pickup, chasing a jogging Obama; the supporter says, “Yeah . . . let’s get him. But what crime did he commit?” and Trump replies, “Isn’t it obvious?” Some readers of the Daily Times newspaper in Tennessee decried it as racist commentary.

Jones, who is White, told the Daily Times that his point was: “To some people, Obama’s crime is that he’s Black,” and to the killers, “Arbery’s crime was being Black.”Jones tells The Post he has drawn many cartoons about race relations and urges diversity in his industry. “When it comes to something like Black Lives Matter,” he says, “shouldn’t we hear from people who are actually living Black lives?”

Darrin Bell, the first Black journalist to win the Pulitzer Prize for editorial cartooning, who’s syndicated by King Features and Washington Post Writers Group, says the Biden era should invite opportunity: “This would be the perfect time to hire a Black cartoonist who’s dealt with a lot of the same crap [Vice President Kamala] Harris is in for, and can critique it not only from empathy, but from experience. A Black cartoonist who isn’t as much at risk of being called ‘racist’ for finding fault with her if it’s warranted.”

He thinks a Black cartoonist might also be uniquely critical and uncowed by the diversity of the Biden administration: “There’s an old saying in Black culture: ‘All skinfolk ain’t kinfolk.’ And I’d be watching them like a hawk to see if all this welcome diversity is just a smokescreen.”

Yet will hiring practices change in a declining environment, as staff jobs disappear? Signe Wilkinson — who in 1992 became the first woman to win the cartooning Pulitzer — isn’t hopeful. “Until Biden creates the Secretary of Cartooning Cabinet position that can mandate quotas for who cartoons where, there will be no big change in the demographics of traditional cartooning,” says Wilkinson, a longtime Philadelphia Daily News staffer before becoming a contract worker several years ago. She retired from Philly.com in December and only draws now for The Washington Post Writers Group.

Wilkinson’s arc mirrors much of the field. When she became a staff cartoonist in the early ’80s, she had roughly 150 peers who had a full-time newspaper perch, according to former Editor & Publisher columnist Dave Astor.

Now, there’s less than one-fifth that many. “The age of the staff editorial cartoonist is dead,” says Keith Knight, a Malden, Mass. native and veteran syndicated cartoonist (“The Knight Life”) and co-creator of Hulu’s “Woke.” 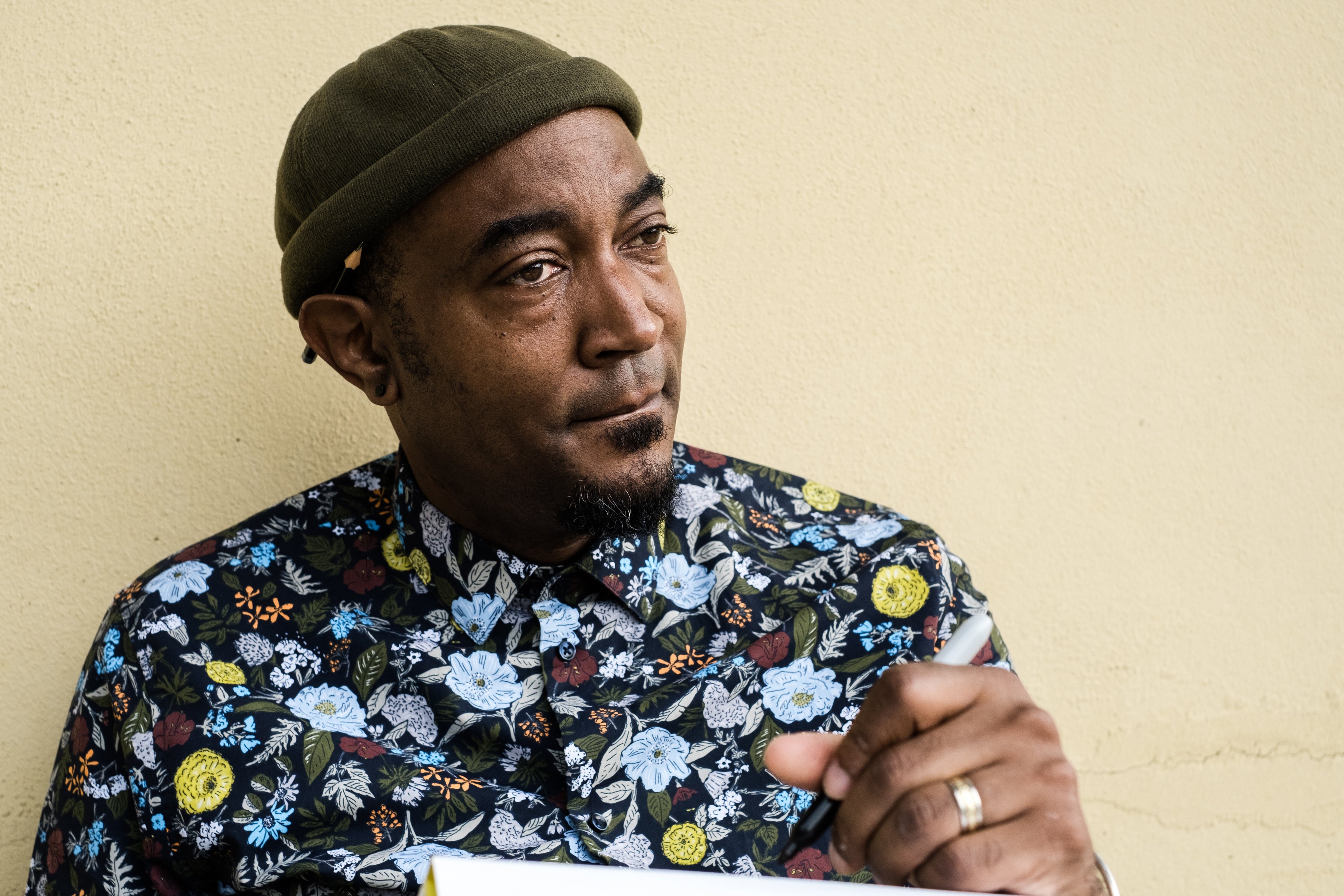 “The age of the staff editorial cartoonist is dead,” says Keith Knight, a Malden, Mass. native and veteran syndicated cartoonist.

So where can readers turn to read a broader multicultural swath of political cartoonists? Many talented creators are working off the mainstream or in other forms, like graphic journalism. Knight sees “a diverse generation of up-and-coming cartoonists tackling political topics,” but underscores that it is “up to editors at mainstream media outlets [as to] whether they want to amplify this new crop of creators.”

Jen Sorensen, the incoming AAEC president and the first woman to win cartooning’s Herblock Prize, says the responsibility rests with editors to do their homework. “While editing comics for [the media website] Fusion, I used the Cartoonists of Color Database compiled by Mari Naomi, did Internet research, got referrals from friends,” says Sorensen, whose work appears in such outlets asthe Nib and Daily Kos. She adds: “The key to finding more women and people of color is making the effort.”

Many indie cartoonists represent a diversity of formats, as well, liberated from space constraints placed on print newspaper cartoons for centuries. “Staid insistence on a very traditional editorial-cartoon format is limiting demographic change” among print-newspaper cartoonists, Sorensen says. “People of all ages seem to enjoy multi-panel strips, yet it is virtually impossible to get this work into major newspapers nowadays. It’s almost like ‘Doonesbury’ never happened.”

Ann Telnaes, a contract cartoonist for The Washington Post, has helped blaze a trail for political animation, and thinks creators “should take advantage of the opportunities that creating editorial cartoons online brings: animation, multi-panel long-form and sketching real-time events.”

Telnaes, the only woman besides Wilkinson to win the cartooning Pulitzer, last year taught an editorial cartooning class at California Institute of the Arts, her alma mater. “The majority of the students preferred a long-form, multi-panel format rather than the traditional single-panel box,” she says. “I’m also happy to note the majority of the class were women.”

Some women have found prominent media outlets for their multi-panel editorial art, including Stossel and Malaka Gharib, whose online work for NPR has included comics centering on coping with the pandemic.

As newspaper staff jobs vanish, though, many political cartoonists must build enough revenue streams — such as self-syndication, Patreon pages and newsletters like CounterPoint — to survive and thrive financially. “The problem for these creators is that there are now very few outlets where you can cultivate your craft while getting paid,” says Matt Bors, who spotlights independent talent as editor of the comics website the Nib. “It’s a shrinking genre, and we’re trying to hold the line.”

Some artists believe increasing the diversity of mainstream cartoonists could invigorate the art form in newspapers. But Lubchansky says: “I’m not sure I see newspapers getting with the times — nothing in the recent past has really convinced me of that … I honestly don’t imagine papers catching up before the last newspaper cartoonist loses their job.”

John Diaz, the editorial page editor at the San Francisco Chronicle, acknowledged that the diversity issues and staff cuts that have affected newsrooms have also hit cartooning. He notes that those cartoonists “who remain are brilliant and persevere. I’m doing what I can in my position to keep the genre going.”

Diaz says there are not only fewer staff cartoonists but also tighter budgets for syndicated work. As a result, he says, “There is less opportunity for aspiring cartoonists to showcase their talents.”

Diaz hopes, though, that newspaper cartooning will survive economic trends. “I love the genre, and it’s needed more than ever in modern politics, where absurdity so desperately cries to be called out. No one does absurdity better than an editorial cartoonist,” he says, underscoring that a broad range of voices is crucial to that vitality.

Yet Bors, a past Pulitzer finalist who gave up chasing a steady staff job, is not optimistic. “Obviously cartooning overall is presenting a lot of opportunities for people,” he says, “but political cartooning’s glory days are over.”